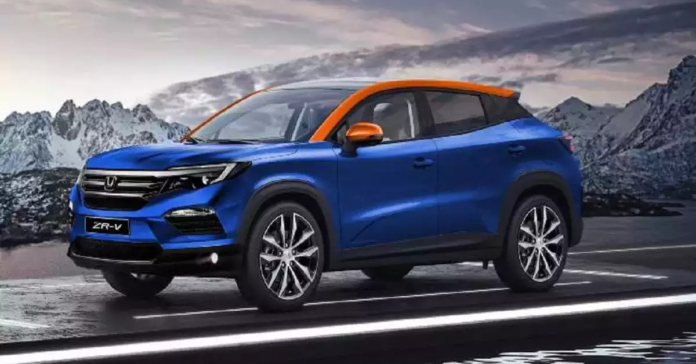 The first official images of the new Honda ZR-V SUV for the Chinese market have been released by GAC Honda. It’s just a rebadged version of the recently revealed HR-V for the US market.

The new Honda ZR-V is a C-segment SUV that is based on the 11th generation Civic. It is larger than the Honda HR-V, a B-segment vehicle sold in Europe and Japan. According to reports, the new ZR-V will be introduced in certain European countries, where it will be positioned between the HR-V and the CR-V.

The new Honda ZR-V SUV looks almost identical to the HR-V in the United States. It has a bigger octagonal grille flanked by narrow LED headlamps with L-shaped daytime running lights. The fog lamp housing is housed in C-shaped mouldings on the lower bumper. Although the dual exhausts are not visible in the press photos, the rear design appears to be identical to the new HR-V.

Although no interior images have been released, the cabin design is expected to be similar to that of the HR-V. GAC Honda, on the other hand, will make a few adjustments to keep things interesting in the market.

A 1.5-litre turbocharged four-cylinder petrol engine mated to a CVT will power the new Honda ZR-V SUV. The VTEC turbo engine can generate 180 horsepower and 240 Nm of torque. The sculpted tailgate bears the “240 Turbo” symbol, which is also seen on the Honda Integra car sold in China.

Honda has stated that an all-new compact SUV will be launched in India in 2023. The new vehicle will most likely be built on the City chassis and include a hybrid powertrain. It will compete against the Hyundai Creta, Kia Seltos, Volkswagen Taigun, Skoda Kushaq, and MG Astor.

The next Honda compact SUV is also expected to borrow design cues from the larger HR-V and the new Honda SUV RS concept, which debuted at the 2021 Gaikindo Indonesia International Auto Show.