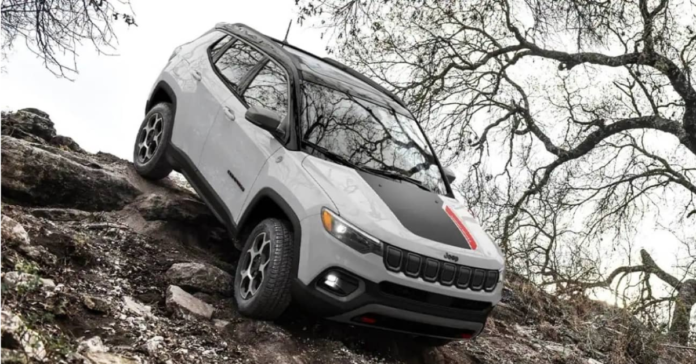 The Jeep Compass Trailhawk has returned to India as a facelift model, with a starting price of Rs 30.72 (ex-showroom), which is Rs 1 lakh more than the standard Compass’s top-spec S variant. The new Trailhawk takes visual and functionality cues from the Compass Facelift, which debuted in India last year. The Trailhawk will compete against the Toyota Fortuner, MG Gloster, and Isuzu MU-X, and is based on Compass’s top-end S model.

To begin with, the facelift model features a relatively different grille, modified LED projector headlights with LED DRLs, a bumper sticker, and a conspicuous red-finished tow hook at the rear. The SUV now comes with 17-inch new design alloy wheels wrapped in 225/60 Falken Wildpeaks all-terrain tyres, as well as Tailgate emblems on the front fenders and the Trailhawk badge on the hatch.

Stepping inside, the 2018 Jeep Compass Trailhawk’s cabin resembles that of the Compass Facelift. The interior is completely black, with red accents and stitching. Trailhawk embossing is also available on the seats. The 10.25-inch touchscreen infotainment system and the digital instrument cluster remain unchanged, despite some interior changes. A panoramic sunroof, wireless charging, push-button start/stop, multi-function steering wheel, and many other conveniences are included.

Furthermore, the vehicle’s off-road capabilities include four modes: Auto, Snow, Sand/Mud, and a Rock mode. The Trailhawk features the same engine and transmission as the Compass facelift in terms of mechanical characteristics. As a result, the SUV is powered by a 2.0-liter Multijet II diesel engine with a 9-speed torque converter automatic transmission that produces 170 horsepower and 350 Nm of maximum torque. It’s worth mentioning that the Trailhawk comes standard with four-wheel drive and a choose terrain system.