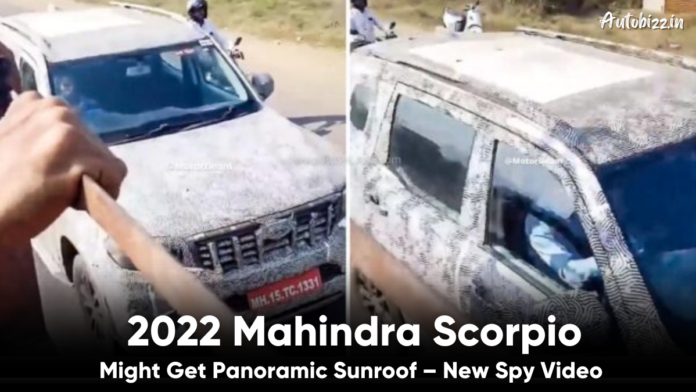 Mahindra is now enjoying in the glory of the new-generation Thar and the recently released XUV700. Mahindra is expected to cash in for the next couple of years, with over one lakh pending bookings for the two new automobiles.

The local carmaker, on the other hand, is preparing to debut a huge new product in the form of the next generation Scorpio. It is scheduled to premiere in March 2022. The forthcoming Scorpio is one of a slew of new models set to debut between now and 2026.

The redesigned fog light enclosures, which include new C-shaped LED DRLs and a large air inlet with a skid plate, are housed in the muscular front bumper. Nonetheless, Mahindra has kept the new-gen model’s boxy design, which is strongly connected with the ‘Scorpio’ nametag. It also has bulging wheel arches and roof rails, giving the Scorpio a tough look. The SUV is equipped with 18-inch alloy wheels that are wrapped in thick rubber. The back has been redone, although it is still flat. The rear glass panel, on the other hand, has a small rake to it, giving the SUV a new look. A roof-mounted spoiler, a shark-fin antenna, and side stairs for easy exit and entrance are among the other external characteristics.

The inside of the next-generation Scorpio has also been totally redesigned, with a new dashboard design and new seat fabric. Instead of jump seats, Scorpio will have a forward-facing bench seat in the third row for the first time. It will most likely be available in a 5-seat form as well. The new Scorpio will be equipped with an 8.0-inch touchscreen infotainment system, an analogue instrument panel with a digital MID, dual-zone temperature control, an electric sunroof, a Micro-Hybrid function engine start/stop functionality, a multi-function steering wheel, and other amenities. Up to six airbags, ABS with EBD, electronic stability control, and other safety equipment might be included in the safety package.

The engine options for the 2022 Scorpio will be the same as for the XUV700 and Thar. A 2.2-litre mHawk diesel engine and a 2.0-litre mStallion turbo petrol engine are among them. Scorpio’s motors, on the other hand, are likely to be tuned differently than those of its counterparts. A 6-speed manual or 6-speed automatic transmission will be available as an option. In higher-spec trims, a 4×4 drivetrain will be available as an option.