2023 BMW X7 Arrives with More Power and a New Look 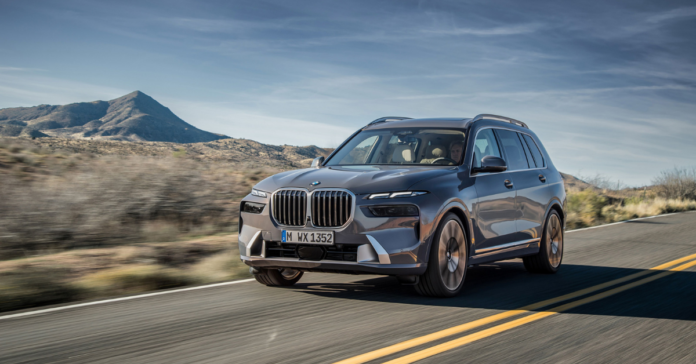 The BMW X7, the German automaker’s premier luxury SUV, has been modified. The model boasts a new design and more features, as well as an overhauled powertrain with innovative technologies. While the new BMW X7 facelift for 2023 is currently on sale in other areas, it is expected to arrive in India at the end of this year or early next year. It will continue to compete against the Audi Q7 and Mercedes GLS in this segment.

The SUV’s front fascia now looks sportier than before, thanks to considerable visual modifications. The 2018 BMW X7 has a redesigned kidney grille with darker slats and chrome surround, split headlamps (a first for BMW), and LED running lights along the hood line. A cascade lighting feature is placed into the front grille.

The newest iDrive 8 infotainment system, which includes a 14.9-inch touchscreen and a 12.3-inch digital instrument cluster, is one of the feature improvements. The new info unit includes a cleaner home screen, a more streamlined UI, and voice and gesture control. As standard, the SUV comes with multi-contour seats with heating capabilities for both the driver and front passenger. The M60i comes with extended Merino leather, while the xDrive 40i comes with vegan Sensafin synthetic leather.

Active roll stabilisation and integral active steering are also included in the top-of-the-line model. The 3.0L inline 6-cylinder (xDrive 40i) and 4.4L V8 (M60i) engines will be available in the next BMW X7 facelift in 2023. Both motors, however, are now equipped with 48V mild hybrid technology, which allows them to produce more power and torque.