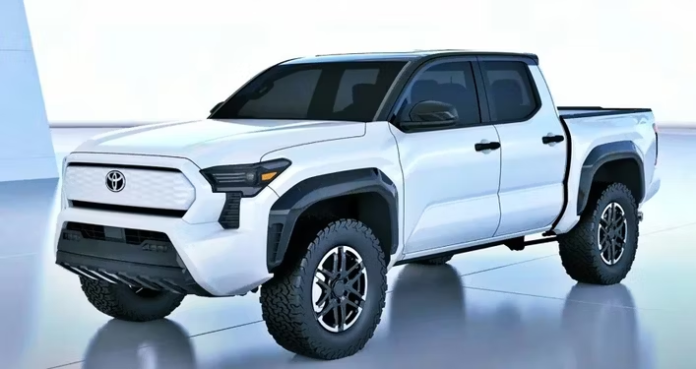 The mid-size Tacoma, unlike the full-size Tundra, will have a body-on-frame platform modification. However, for Toyota’s most popular truck to stay dominating, considerable changes are required, and the upcoming generation seeks to achieve this. Unlike the full-size Tundra, the mid-size Tacoma outsells domestic competitors such as the Chevrolet Colorado and Ford Ranger.

Toyota’s new TNGA-F design will underpin the Tacoma, as well as the new Tundra and the next Sequoia and 4Runner. An artist’s rendering depicts what a new Tacoma TRD Pro may look like. The new Tacoma might make its appearance around 2024.

Toyota has not revealed the price of the ’24 Tacoma or the trim levels that will be available. The portfolio should be similar to the previous generation, with models ranging from the entry-level SR to the popular TRD Sport and Off-Road variants. We anticipate a price increase over the existing model, which starts about $28,000.

The Tacoma deserves a new engine. While it is presently the only mid-size truck with a manual gearbox (and we hope it stays that way), the six-speed automatic transmission is awkward and out of date when compared to competitors such as the GMC Canyon and Nissan Frontier. The current Tacoma has an underpowered four-cylinder base engine and an available V-6 engine that is less powerful than every other V-6-powered competition, including the much-maligned Honda Ridgeline. Toyota is expected to equip the 2019 Tacoma with a turbocharged four-cylinder engine, maybe the 2.4-liter from the Lexus NX350, which produces 275 horsepower and 317 pound-feet of torque. This engine is paired with an eight-speed automated transmission. The Tacoma, like the new Tundra, might be available with a hybrid version of its V-6 powerplant. The mid-size truck will still utilize a body-on-frame construction, but we expect it to lose its rear leaf-spring suspension for a more modern coil-spring setup that should improve both its ride and handling.

You May Like:  5 Gorgeous European Sports Cars Were Huge Flops

The new Tacoma’s interior is expected to be inspired by the bigger Tundra. This implies hefty stylistic elements, higher-quality materials throughout, and contemporary features. We anticipate that the vehicle will continue to be available in extended and crew cab configurations, as well as short and long bed options.