6 Airbags Mandatory in Cars from October 1 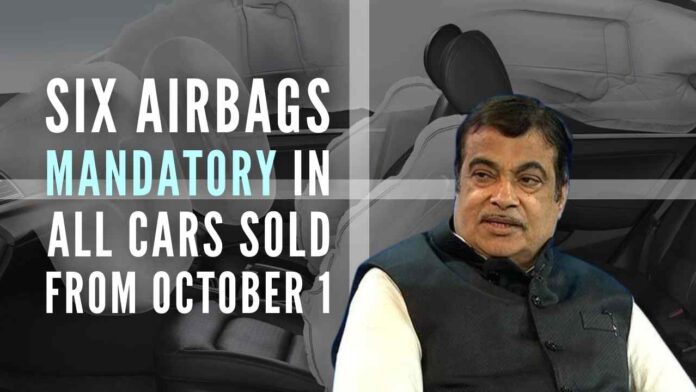 Friday’s draft notification is a follow-up to Union transport minister Nitin Gadkari’s appeal in August last year that asked car manufacturers to “compulsorily provide a minimum of 6 airbags across all variants and segments of the vehicle”.

The government has begun the process of making six airbags mandatory for all cars being sold in India from October 1 this year.

On Friday, the government released a draught notification requesting public and other stakeholder feedback on a proposed rule that will require car manufacturers to include six airbags beginning October 1. The government will analyse the comments received over the next month and issue a final notification, with any necessary revisions, to apply the rule.
The announcement on Friday is a response to Union transport minister Nitin Gadkari’s call to automakers on August 3 of last year to supply a minimum of six airbags across all vehicle versions and categories.

Friday’s notification is a follow-up to Union transport minister Nitin Gadkari appeal to car manufacturers on 3 August last year to provide a minimum of 6 airbags across all variants and segments of vehicles.

Read More: Here’s How Safety Rating System For Cars In India May …

To be sure, many Indian cars already have six airbags in their top variants.

“In order to enhance the safety of the occupants in motor vehicles carrying up to 8 passengers, I have now approved a draft GSR notification to make a minimum of 6 airbags compulsory,” Nitin Gadkari said in a series of tweets on the announcement before the formal notification was uploaded online.

“To minimise the impact of frontal and lateral collisions to the occupants seated in both front and rear compartments, it has been decided that 4 additional airbags be mandated in the M1 vehicle category, i.e two side/side torso airbags and two side curtain/tube airbags covering all outboard passengers. This is a crucial step to make motor vehicles in India safer than ever,” Gadkari said.

M1 vehicle category refers to passengers cars with a maximum of eight seats in addition to the driver’s seat and includes hatchbacks, sedans, MUVs and SUVs.

Read More: Six Airbags To Be Soon Compulsory In India

Amit Bhatt, executive director (Transport), WRI India said the decision is an important step towards road safety. “India exports some of the safest vehicles abroad. Still, somehow safety takes a back seat when it comes to vehicles sold in India because producers feel it will raise the cost. Therefore, having a mandatory safety standard would result in safe vehicles and decrease prices due to economies of scale,” he said.

But an official at the Society of Indian Automobile Manufacturers (SIAM) said the ministry’s focus continues to be more on people inside a car, instead of those outside on the road such as pedestrians and cyclists.

“We have been saying that the decision of the government has to be backed up by accident data and have conveyed the same to the ministry. Firstly, globally nowhere such a mandate exists. Even the mandate for an airbag for the co-driver which we now have in India doesn’t exist anywhere else. Secondly, car occupant safety should not be the priority concern over or against pedestrian or two-wheeler safety. Thirdly, Indian crash regulations are absolutely at par with global standards. Fourthly, there have also been behavioural issues with regard to four wheeler drivers,” said a senior member of SIAM requesting anonymity.

In the recently concluded winter session of the Parliament, Gadkari told the Rajya Sabha that 23,483 pedestrians lost their lives in road crashes in 2020. As per NCRB data, 17,538 car occupants died in road crashes the same year.

The SIAM official also added that the new mandate, once notified, will also lead to cost escalation in every vehicle. “Almost 81% of India’s vehicular population is that of two-wheelers, with such a mandate, the cost of cars will go up and the gap between two-wheelers and four-wheelers will only widen making it difficult for them to migrate to cars,” the official said.