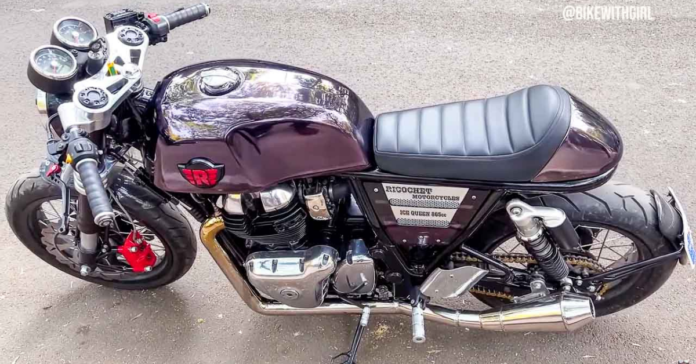 Royal Enfield motorcycles are one of the most popular modifications. They are a fantastic choice for experimenting with due to the availability of aftermarket equipment for the bikes. Throughout the years, we’ve seen a number of highly unique and visually amazing mod projects. Some were more concerned with aesthetics, while others were more concerned with performance. The modded Royal Enfield 650 Twin, which can be seen in the Youtube video broadcast by the channel “BikeWithGirl,” is one such example.

This modification was done by Debashish and his team from the Pune-based workshop Ricochet Motorcycles. The design of the custom-built bike has been upgraded, and it now has a more obvious presence on the road. A custom-stitched single-piece saddle with a ribbed design and a cowl at the back is included.

The bike’s weight has been reduced significantly thanks to the use of unique materials for the clip-on handlebar, front carbon fibre mudguard, and key lock construction. The front fender has been shortened, while the rear unit has been removed to save weight. The red accents on the gas tank and brake callipers stand out against the black background wonderfully.

The improvements made to the powertrain are also noteworthy. The engine has been bored out to allow for a higher displacement, which is now 865cc instead of 650cc on the stock model. This was accomplished by sliding the piston via an enlarged sleeve, which increased the cylinder capacity. Along with the cylinders being bored out, the gearing has been changed, with a larger sprocket with more teeth.

To keep up with high-powered driving, it also gets a better drag chain. The adjustments to the sprocket and drivetrain resulted in a 25% increase in starting acceleration. The bike will be analysed at a dynamo test centre, but the specific performance data from the bored-out engine have not been released. According to the information available, the overall cost of the customising procedure is Rs 4.50 lakh.