This is the end of the road for the Japanese exotic, with the automaker building just 350 examples of this high-performance car.

Sorry, Acura enthusiasts, but the NSX supercar is no longer available. The Japanese carmaker is ending production of this hybrid exotic after half a decade, but it will be given a suitable send-off. Acura’s Performance Manufacturing Center in Marysville, Ohio, began production of the limited-edition Type S vehicle on Thursday.

Only 350 of the limited-edition NSX Type S will be produced, effectively ensuring its exclusivity. The automobile was introduced at last year’s Monterey Car Week, and when the reservation book opened in August, all copies were quickly sold out.

There are a few slight differences between the Type S and “normal” NSXs. They have more aggressive front- and rear-end style, for starters. A retuned adaptive suspension system works with five-spoke wheels covered in Pirelli P-Zero tyres to offer plenty of grins per gallon. The cosmetic alterations are completed by a carbon fibre roof and a sprinkling of Type S decals.

A familiar but mildly modified hybrid powertrain, centred around a twin-turbocharged 3.5-liter V6, provides motivation. This combination, in conjunction with three electric motors (which give all-wheel drive for improved traction), produces 600 horsepower and 492 pound-feet of torque, which is 27 more horsepower and 16 more pound-feet than lesser NSXs. New turbochargers and intercoolers, as well as a more powerful hybrid battery pack, contribute to the improved performance. The car’s nine-speed dual-clutch automatic transmission has also been tweaked to provide even more acceleration.

The first two Acura NSX Type S models to leave the factory were painted Gotham Gray, a matte-metallic colour that looks great but requires particular maintenance. This limited-edition exotic is expected to be completed later this year. We’re disappointed to see the NSX go, but the Type S’s improvements help to soften the blow. 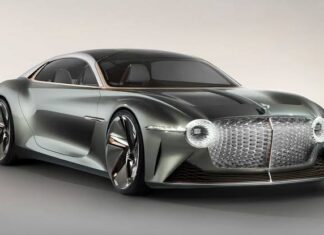 Team Autobizz - May 17, 2022 0
Drivers of the Bentley EV will be able to select a slower acceleration speed if the quicker setting makes them feel nauseous. When it debuts...