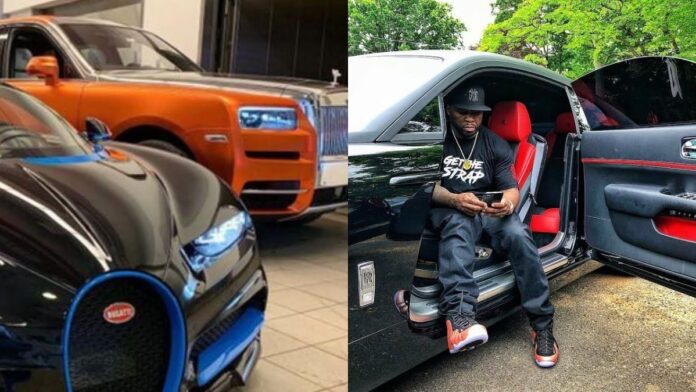 Curtis James Jackson III (born July 6, 1975), better known as 50 Cent, is an American rapper, actor, and entrepreneur. Known for his rapping skills, he has been called a “master of the nuanced art of lyrical brevity”. Like his rapping career, his car collection is also amazing, where he owns some of the most expensive cars. 50 Cent’s car collection includes cars like the Bugatti Chiron, rare Enzo Ferrari, Phantom Drophead, Maserati MC12, and many more.

Starting with 50 Cent’s car collection, the first one is the fastest hypercar Bugatti Chiron. Well, only 400 units of this insane machine have ever been made by Bugatti. The car is powered by a huge W16 quad-turbo producing over 1500 horsepower and over 1600 Nm of Torque. With that, it is capable to do 0-60 in just 2.3 seconds and has a top speed of 261 mph which holds a world record at its time. This car is being a Bugatti Hypercar costs $3.2 million and above according to the extra specs.

In one of his Instagram videos, 50 Cent flexed while wearing the same design T-shirt and shoes matching his car wrap. His car is wrapped with gold and blue pattern wrap which looks amazing. The car is powered by a Lamborghini naturally aspirated V12 with 730 horsepower. The top speed is 217 mph and can do 0-60 in just 3.0 flats.

You May Like:  Dulquer Salmaan Brings Home The Mercedes AMG G-63 Worth Rs. 2.42 Crore

Along with the hyper and supercars, 50 Cent also has luxury cars too. His Bentley Mulsanne is also a unique car with a copper-chrome paint job for the exterior. Bentley is considered to be an ultimate luxury and Mulsanne is that kind with a high-quality interior. Also, this car is powered by a 6-liter twin-turbo V8 generating 505 horsepower. The top speed of this car is 190 mph which isn’t a concern as the motive is luxury which makes it a heavier car.

50 Cent owns pretty expensive cars as this Drophead Coupe that costs nearly half a million. This car is also has a crazy color on the exterior which looks more amazing while the roof is down. The car weighs around 2,600 kg as considering the luxury it provides. The car has Rolls-Royce legendary V12 and has a top speed of 149 mph.

Next is a performance SUV in black, the AMG G63. 50 Cent has a great taste in cars as he owns many types of cars. The AMG G63 is a boxy-looking car with a V8 engine under the hood producing 577 horsepower. The car reaches a top speed of 149 mph and 0-60 in just 4.4 seconds.

The car next in the collection is rarest, the Enzo. This Ferrari is named after the legend Enzo Ferrari. He owns this car in yellow color and only 375 units are there in the world. This rare car has an F140 V12 engine with 651 horsepower which is insane for a 2002 year car.

Another rare car from 50 Cent’s garage is this Maserati MC12. This is a track-focused but road-legal car built by Maserati. Only 25 units of this FIA GT Championship car were ever made. The car has a 6.0L V12 producing 621 horsepower and 652 Nm of torque. The car can reach a top speed of 205 mph with 0-60 in just 3.6 seconds.

50 Cent’s next car is the most powerful Rolls-Royce, the wraith that costs $330,000. The car has a red interior that perfectly syncs with the black exterior. It is powered by a 6 liter V12 and produces over 60 horsepower and a top speed of 155 mph.

Along with the fastest Rolls-Royce, 50 Cent’s collection also includes the fastest SUV. The Lamborghini Urus has a top speed of 190 mph and 0-60 in 3.1 seconds making it the fastest SUV in the world. This car is powered by a 4.0L V8 engine with 640 horsepower and 850 Nm torque.

Well, he also owns some more cars like the Rolls-Royce Cullinan, Aventador Murcielago, Ferrari 599 GTB and one more Roll-Royce Phantom as well.