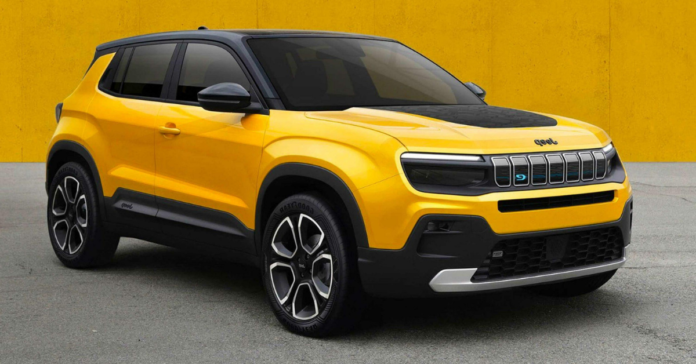 Jeep, a well-known SUV manufacturer, is entering the race in the modern era of the rapidly developing electric car market. The all-electric Jeep SUV will make its official appearance in the coming year, according to Stellantis, the brand’s parent company. During a presentation in Amsterdam, the carmaker announced its plans for producing renewable-energy vehicles in the next years.

However, the owners of Chrysler, Dodge, Maserati, and Fiat don’t reveal any details about the future EV, but owing to a couple of teaser photographs released by the company, we have some thoughts.

According to the photos, the future electric SUV will have Jeep’s trademark seven-section grille with the blue-finished “e” insignia imprinted on it on the front facade. The rear door handles, which are located up near the window rather than in a typical location, are one of the standout features.

The taillamps have “X”-shaped inserts, and the tailgate has a blue “e” as well. The wheel arches are likewise squared off on the sides, and the black cladding covers the full lower half of the automobile. The yet-to-be-named E-SUV appears to be similar in size to the Jeep Compass or Renegade in terms of body proportions. However, without formal confirmation, we cannot be certain.

Similarly, specifications like as range, power, and pricing are now under discussion. Despite this, Stellantis has not revealed where the upcoming car would be sold following its premiere in 2023.

Apart from the impending Jeep electric SUV, the giant carmaker plans to deliver a total of 100 electric vehicles by 2030. Following Tesla’s success in the electric vehicle market, nearly every major carmaker now wants to be an EV manufacturer.