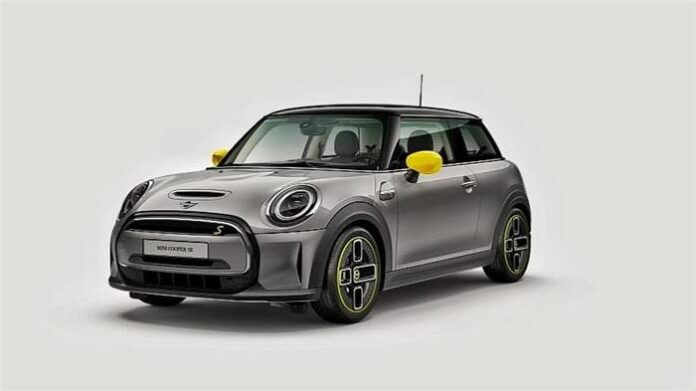 On February 24, 2022, MINI, a BMW Group-owned British manufacturer, will unveil its first all-electric vehicle, the MINI Electric, in India. The automobile was first unveiled last year, and pre-orders for the electric vehicle began in October 2021 for a token of Rs. 1 lakh. The initial batch of 30 automobiles was sold out in a matter of days. The electric hatchback is likely to cost roughly Rs. 50 lakh when it arrives in India as a fully built unit (CBU) (ex-showroom, India).

The MINI Electric 3-Door, also known as the MINI Cooper SE in some areas, debuted globally in 2019 and is the electric version of the classic British hatchback. The model is distinguished by a pair of unusual 17-inch alloy wheels, as well as round headlights, Union Jack-themed LED taillights, round ORVMs, and that recognisable profile. With a blank front grille panel and a new ‘E’ logo, the MINI Electric stands out even more. White Silver, Midnight Black, Moonwalk Grey, and British Racing Green are the four colours available for the electrified 3-Door, with contrast yellow accents on the wheels and yellow ORVMs.

The electric powertrain in the MINI Electric produces 181 horsepower and 270 Nm of peak torque. The 32.6 kWh lithium-ion battery pack provides power and has a range of 270 kilometres on a single charge. The electric hatchback has an electronically regulated peak speed of 150 kmph and can sprint from 0-100 kmph in 7.3 seconds. The electric version is around 145 kg heavier than the fuel variant.

The interior design is similar to that of the normal MINI Cooper 3-Door, although there are several aspects that hint to the car’s electric nature. The MINI Electric comes with an 8.8-inch touchscreen infotainment system, a 5-inch digital instrument cluster, and Nappa leather interior, among other things. The yellow concept from the outside is extended inside as well, with yellow accents on the dashboard and centre console. The car has a cargo area of 211 litres with all four seats upright, which can be enlarged to 731 litres with the rear seats folding.