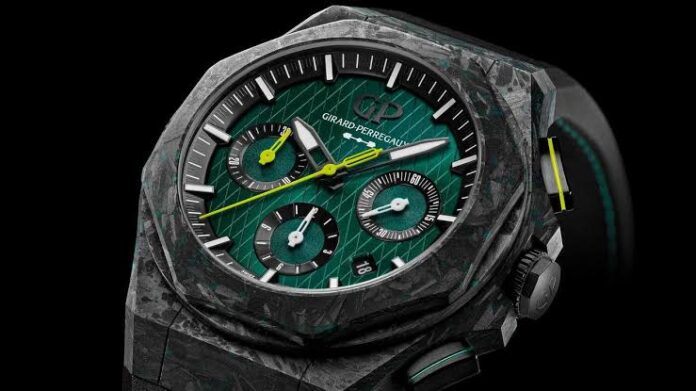 The watchmaker is building 306 of this very green chronograph. In the US, they retail for $27,800.

The latest partnership between the Swiss watchmaker and the British manufacturer is the Girard-Perregaux Laureato Absolute Chronograph Aston Martin F1 Edition. The chronograph is just bold enough to seem right at home on an F1 grid, limited to only 306 units – a nod to the complete distance in kilometres of the 2022 British Grand Prix at Silverstone.

Aston Martin F1 Team Principal Mike Krack stated at a digital launch event that his team and the designers at G-P “always seek to discover lighter and stronger solutions.” To put it another way, this Laureato features some outstanding advances.

The watch boasts two firsts for Girard-Perregaux: a new composite material for case, as well as one for the very bold strap.

The 44-millimeter case incorporates the company’s inaugural use of a process that blends titanium powder and pieces of carbon fiber. Those materials have been taken from two Formula One cars from the 2021 season (“No crashed cars were used,” assures Krack.) The material is then mixed with a tinted resin to create a green hue.

The result is a case that has a look similar to forged carbon fiber. If you look at it closely, you’ll catch subtle green touches in the material that match the watch’s “Racing Green” dial and the livery of the Aston Martin F1 car.

The other new element for Girard-Perregaux is the construction of the strap. Synthetic rubber and some of the aforementioned, F1-car sourced carbon elements. The company calls the resulting material GP Rubber Alloy, and it’s naturally been rendered in the same Aston Martin Racing Green. There’s a fabric-effect facade on the outside and a titanium buckle capable of micro-adjustments for just the right fit.

Girard-Perregaux gives the Laureato Aston Martin F1 Edition’s dial design elements that take inspiration from the race car. The dial is painted in eight layers of Racing Green with a cross-hatched pattern. The openings in the hands are supposed to evoke the inlets vehicles use for cooling. The hands for the seconds and on the 9 o’clock chronograph register are wrought in AMR’s lime green like the accents on the F1 machine.

For the first time on a Laureato Absolute Chronograph, the rear of the watch has a sapphire crystal that allows for viewing the hand-finished movement. To non-watch enthusiasts, this may seem like an afterthought but G-P tells us that there can be as many as five types of finishing on a single bridge inside the movement.

If you want to add this charming green chronograph to your collection, or just wear it while you drive your DBX707, you’ll have to come up with $27,800. A pittance when you consider you’ll be rocking the same timepiece as Sebastian Vettel and Lance Stroll (at least for a season).

Krack assured us that both drivers will be wearing the new G-P on the grid, but mentioned, “I’m not sure they will be able to wear it in a race.” Just ask Lewis Hamilton.