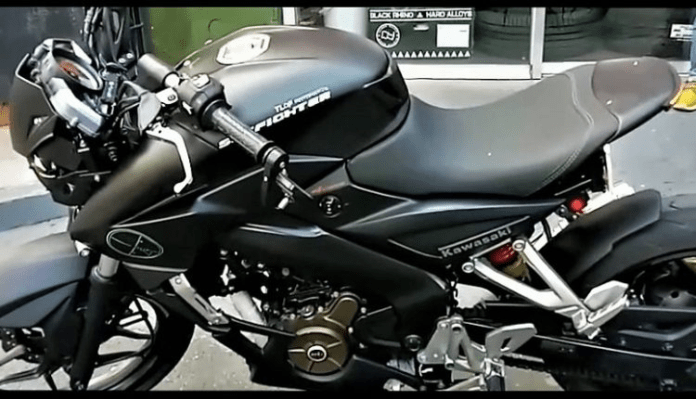 The Bajaj Pulsar is a well-known sport bike in India, but Indonesia shows to be an even better place to modify this small sport bike. In the past, we have seen some of the best Pulsar NS200 motorcycles that have been modified, so the street fighter’s side of the story is still good. With its human-like facial expressions, it is marketed under the name Kawasaki Pulsar 200NS and turns every available head. You did read that correctly. This Pulsar 200NS has a front fascia that looks like it was inspired by a transformer. It has unique headlights that look like twin eyes that may make angry faces and provide superior lighting.

The motorcycle not only had a unique front fascia but also a redesigned rear end that nearly skips the back seat. The frame was precisely cut, and it finished in a slim tail with an embedded LED strip. Wider tyres were installed at both ends to improve roadway presence. The motorcycle’s whole body was wrapped in matte black to give it an alien aesthetic. It took TLDF MotoMotive over 45 days to transform the ordinary motorcycle into this incredible machine. For ease of manoeuvrability, the fuel tank and instrument console were retained standard.

An outstanding 199.5cc, single cylinder engine powers the Bajaj Pulsar NS200, delivering 23.17 BHP at 9500 rpm and 18.3 Nm at 8000 rpm. The engine is paired with a 6-speed transmission. In India, Bajaj Auto provides the NS200 with a carburetor-fed engine, whereas some other countries come standard with the fuel-injected model. Front ABS is an option on the NS200 built to Indian specifications, however twin channel ABS is only available on the Dominar 400. In India, it weighs 152 kg because the weight of the motorcycle also includes any required extras. This variant would undoubtedly be lighter than the stock one.