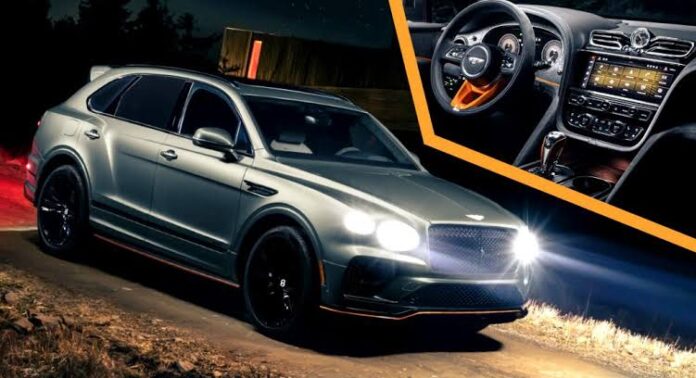 The Bentayga Speed is driven by a 6.0-litre W12 engine that produces 634hp and 900Nm and sends power to all four wheels via an 8-speed automated transmission. This allows the premium SUV to sprint from 0 to 100 kilometres per hour in 3.9 seconds and reach a top speed of 306 kilometres per hour.

The car is finished in a colour dubbed Cypress, which is a metallic grey with green undertones that recalls the first-generation Bentley Continental GT’s introduction in 2003. It also comes with Bentley’s Blackline Specification, which includes gloss black exterior detailing. The car’s carbon fibre has been highlighted with an Orange Flame colour that “takes inspiration from comet dust streaks through the night sky,” according to Bentley. The car’s interior features a Beluga and Porpoise style option, custom tread plates showing the planets of the solar system, and orange stitching on the bezels and upholstery. Bright orange accents may also be found on the gear lever and steering wheel.

Bentley claims that its Mulliner design team has completed 100 requests so far this year, more than doubling the number of customization requests from the previous year. The Bentayga is now the brand’s best-selling model, with over 28,500 units sold, and is expected to help the company set yet another record in 2021. Last year, the SUV accounted for 40% of the brand’s overall sales.