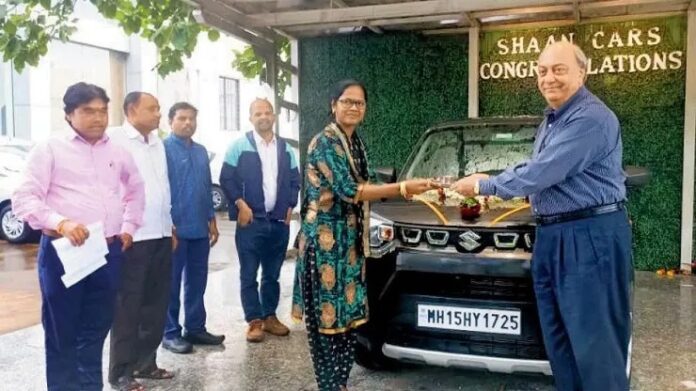 Maya Mukti’s journey from rag-picking to representing India at the UN is one of inspiration. In India, Maya Mukti, a 13-year-old bride, worked as a rag collector. When Cyrus Poonawalla, the head of the Serum Institute of India, contacted her, she was appointed India’s representative at the UN. Poonawalla wished to support her endeavour.

She requested a car from Cyrus Poonawalla so that she could visit the villages surrounding Nashik city. Currently, Maya Mukti is assisting in alerting the authorities to the problems facing the villagers. Maya received a brand-new Maruti Suzuki S-Presso from Poonawalla on Tuesday.

The former rag collector turned video journalist is keeping an eye on these problems until they are resolved. She nearly ran out of money as a result. Maya expressed her shock at how a stranger could simply offer assistance to another stranger after reading a newspaper to Mid-Day. Maya recently received her driving instruction and licence.

To get to the villages, Maya had to take infrequent public transportation, pay for taxis, or rent a car. According to her, the car will help her save a lot of time, effort, and money. She promises to put in much more effort and use the car to assist more people.

Maruti Suzuki officially reported that it sold more than 75,000 S-Presso vehicles in the market after its launch. The S-Presso has SUV DNA because it is designed with young people in mind, including a high-positioned bonnet that gives the vehicle a commanding stance. Large headlamps and two LED DRLs are also included with the S-Presso.

Like all other Maruti Suzuki vehicles, the S-Presso only has a gasoline engine to choose from. It has a 1.0-liter K-Series petrol engine that produces a maximum of 67 Bhp and a maximum of 90 Nm of torque. It has an AMT option in addition to a 5-speed manual transmission. Official statistics indicate that the S-Presso returns a good mileage efficiency of 21.7 km/l.

The brand-new Celerio was just released by Maruti Suzuki in the Indian market. The new vehicle is now India’s most fuel-efficient petrol vehicle. The manufacturer has a tonne of vehicles planned for the Indian market the following year. The new Baleno facelift, all-new Vitara Brezza, all-new Alto, Baleno-based SUV, new S-Cross, and more are among Maruti Suzuki’s upcoming vehicles.

Mahindra XUV700 vs Scorpio-N: Which One To Buy?