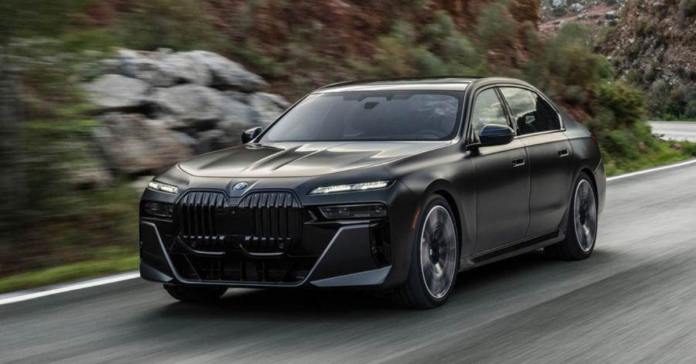 BMW has unveiled the seventh iteration of its 7 Series luxury sedan. With the electric propulsion automobiles designated the i7, the new BMW 7 Series is available in IC, hybrid, and EV configurations.

The 3.0-litre turbocharged straight six engine in the entry-level BMW 735i delivers 282bhp and 425Nm of peak torque. The 735i’s engine is mated to an eight-speed automatic transmission that drives the rear wheels. The 735i accelerates from 0 to 100 km/h in 6.7 seconds and tops off at 250 km/h.

The 740i, which employs the same engine as the 735i, is the next car in line. The 740i’s 3.0-litre straight six engine produces 375bhp and 540Nm of peak torque, which is transmitted to the rear wheels via an 8-speed torque converter automatic transmission. The BMW 740i accelerates from 0 to 100 kilometres per hour in 5.4 seconds and has a top speed of 250 kilometres per hour.

The 4.4-litre twin-tubo V8 found under the hood of the new 760i XDrive will be the most powerful petrol engine when the new 7 Series comes in November. The V8 engine develops 536 horsepower and 750 Nm of peak torque, which is sent to all four wheels via an 8-speed automated transmission. The BMW 760i xDrive accelerates from 0-100km/h in just 4.2 seconds and has a top speed of 250km/h.

The 101.7kWh battery pack in the i7 xDrive60 provides a range of 625 kilometres on a single charge. The battery pack is compatible with 195kW DC fast charging, which can charge it from 10% to 80% in 34 minutes. It will take about 9.5 hours to charge using the onboard charger and a 3-phase 11kW AC outlet.

Read More: Video Of BMW X2 Doing A Jump On The Same LA Street As That Viral Tesla Surfaces

In 2023, BMW will introduce a slew of new powertrains for the new 7 Series. These include gasoline and diesel vehicles, as well as a hybrid system that will be available in two versions: 750e xDrive and 760e xDrive. The 750e xDrive will have a max torque of 700Nm and 486 horsepower. With 563bhp and 800Nm, the 760e xDrive will be the most powerful of the two. BMW has also confirmed that a more powerful version of the EV, the i7 xDrive M70, will be released next year with 651bhp.