HomeFun ReadsBuy This ‘One Of Two’ 2011 Shelby GT500 Tribute Prototype For The...
Fun Reads 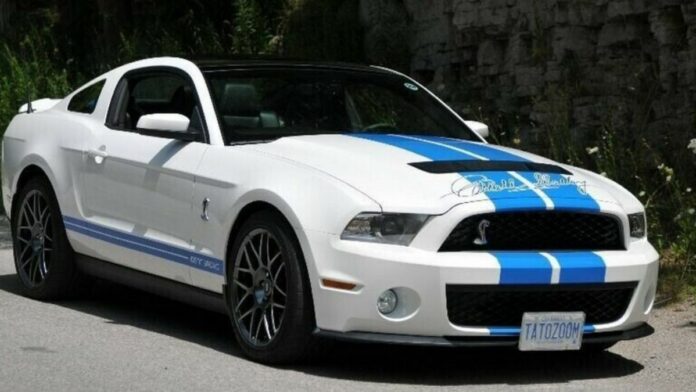 This 2011 Shelby Mustang GT500 is one of just two Tribute Prototype vehicles ever made, and it features Carroll Shelby’s autograph inside. The fierce Mustang comes with a boatload of Shelby memorabilia, including a portrait of the man himself with this precise car, and was built in connection with a Shelby Tribute Charity Event.

The new GT500 is unquestionably more powerful, technologically sophisticated, and quicker, but this older GT500 is a piece of Shelby history. A devout Shelby fan may easily value this Tribute Prototype above the new vehicle, and it’s not like they’re getting a sluggish pony either.

A 550-hp supercharged V8 with 510 lb-ft of torque sits beneath the hood. Only a genuine six-speed manual gearbox transmits such power to the back wheels. It also comes with a plethora of functions and choices.

Read more: EcoBoost Vs V8: Which Ford Mustang Should You Buy?

One of them is the Track pack, which comes with a firmer and lower suspension than the standard GT500, but this car also has its own unique prototype version. It also comes with special forged aluminium 19-inch front wheels and 20-inch rear wheels. Finally, the rear axle ratio is increased to 3.73 from 3.55 in the standard vehicle.

Each of the two Tribute Prototype cars was reportedly sold with a stripe deletion, allowing for the addition of custom strips afterwards. To make it stand out from the already limited throng of GT500s on the road, this car gets a graphic of Shelby’s signature on the hood.

We can’t say whether this GT500 would be permitted to enter the US, but it’s extremely likely to fall under the “Substantially Similar” rule, which permits all kinds of cars in this case.

We wouldn’t be shocked if this unique Shelby appreciated in value in the future, given how hot the used-car market is right now. The best aspect is that it already has enough miles on it that you won’t ruin it by driving it every now and again.