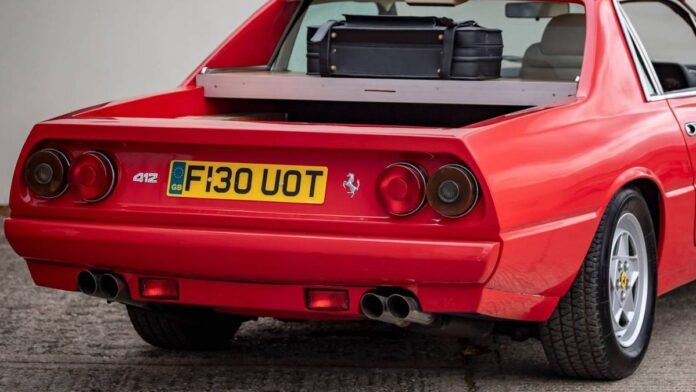 After their new-car shine faded, Ferrari’s exquisite, sharp-edged 365 GT4 2+2 and its 400 and 412 predecessors were unappreciated for years, but they have lately regained legitimacy among collectors. But it’ll be colder weather in hell before Ferrari fans accept this mutant 412 onto Pebble Beach’s turf.

Back in 1989, a lucky guy was picking up the keys to a stunning black, box-fresh example of Maranello’s 412 two-plus-two from his Ferrari dealer, lighting up its 335 horsepower (340 PS) 4.9-liter V12, and proudly driving down the road. However, if that same owner saw or heard his Ferrari today, he would have difficulty believing it was the same vehicle.

Also read: For $10K Could This Ford Mustang Pickup Conversion Fulfill Your Ranchero…

The most stunning aspect of this car’s metamorphosis, which has resulted in it being converted into a Chevy-powered truck, is the colour change to red. If the notion of a V8 Ferrari flatbed excites you for some strange reason, you could purchase one through auctioneers Bonhams for roughly £15-20,000 ($20-26,000) when the virtual hammer falls on April 14.

The V8 conversion occurred years before the pickup’s transformation, and was allegedly carried out by an owner who was dissatisfied with the original Colombo V12’s dependability. Because of the four additional cylinders, the shorter small-block Chevy that took its place has plenty of legroom in the engine bay, but headroom is a different problem, as is the shotgun scoop carb intake.

Normally, it wouldn’t be a good appearance, but it’s the least of this car’s problems in the eyes of purists. That’s because X Elo and Will of UK television programme Ultimate Wheels mutilated this 412 a decade ago, moving the C-pillars forward and chopping off the back decklid to build a pickup bed, which was then lined with teak.

Because there is no tailgate to lower, whatever you wish to put in the cargo space must be thrown over the sides, and there are no back seats. Because the 412 has been languishing in a museum for a few years, there’s no British MOT roadworthiness certificate, but it should be straightforward to get back on the road, and with the original Ferrari’s three-speed GM automatic ‘box linked up to a basic Chevy V8, it should be dependable. The V8’s tune isn’t specified by Bonhams, but a switchable exhaust system assures it will at least sound Ferrari-fast.

Are you enraged by this mutant Ferrari, or are you on the verge of purchasing it? What other reasonably inexpensive and less-loved exotics are begging to be converted to trucks? Please let us know by leaving a comment.