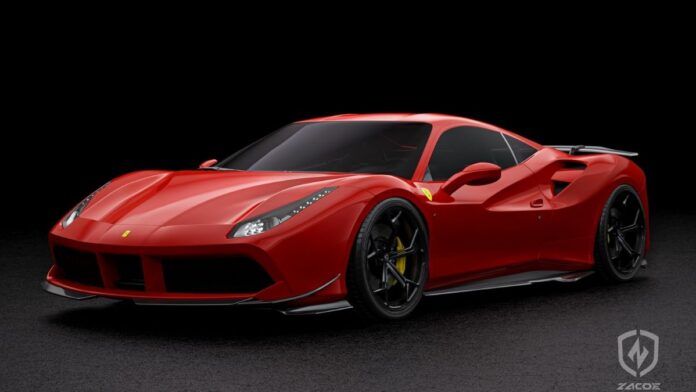 The Ferrari 488 GTB, which debuted in 2015, has been superseded by the F8 Tributo since 2019, but that hasn’t stopped Chinese tuner Zacoe from designing a new carbon-fiber bodykit for the mid-engined supercar, which is restricted to just 5 pieces. Surprisingly, the design is based on the warhorse and armour of Lü Bu, a Chinese military leader immortalised in a historical novel and a famous video game franchise.

To the ordinary petrolhead, all of those allusions may seem complex, so let’s break them down. To begin with, the tuning package for the 488 is called after the famous warhorse “ChiTu” from the 14th-century classic “Romance of the Three Kingdoms.” The carbon-fiber parts resemble the warhorse’s armour, but their design is also influenced by the Lü Bu character’s outfit from the Dynasty Warriors 9 video game.

A noticeable front splitter, side skirt and rear diffuser extensions, and a fixed rear spoiler modelled after the 488 GT3 EVO are among the custom aero components. The additional parts, according to the Chinese tuner, help with aerodynamics, heat dissipation, and turbulence reduction. Finally, Fi Exhaust has introduced a new valvetronic catback exhaust system with two carbon fibre tips that provides a fuller sound on demand.

The body kit is seen in renderings, with the 488 GTB looking lowered and sporting a pair of huge aftermarket wheels. Because Zacoe didn’t specify any chassis or performance modifications, we’re guessing the twin-turbo 3.9-litre V8 with 661 horsepower (493 kW / 670 PS) and 760 Nm (561 lb-ft) of torque will stay stock.

Trending Now:  How Global NCAP Gets Cars For Testing | Who Pays For NCAP Test

Zacoe stated that the project was developed to commemorate Ferrari’s 75th anniversary in 2022, which makes us question why they didn’t select a more contemporary model. The price of the kit and enhanced exhaust hasn’t been revealed by the tuner, but given that just five units are available, we’re guessing it won’t be cheap. According to Zacoe, “ChiTu” owners are ranked higher than other “Prancing Horse” owners, possibly due to the warhorse’s link to the military commander.