For this year’s SEMA event, Mopar, the performance parts and accessories subsidiary owned by Stellantis, has a really intriguing Jeep concept. The Jeep CJ Surge makes its premiere to preview upcoming zero-emissions powertrain components and applications for EV conversions. It doesn’t have a massive V8 under the hood, in fact, it doesn’t even have a combustion engine at all. This electric Jeep off-roader has a retro look, so you read that correctly.

Contrary to appearances, the vehicle is powered by a brand-new propulsion system that features a 400-volt scalable electric drive module with a maximum output of 268 horsepower (200 kilowatts). The drive system transmits power to all four wheels via a two-speed transfer case with variable gearing by mounting new, specially created robust motor mounts to the vehicle’s frame.

24 lithium-ion battery modules located at the back of the cabin and sealed in a solid shell hold the system’s electric energy. Behind the driver’s door is where you’ll find the charging port. Although Mopar withholds the off-range roader’s and performance figures, the battery pack has a 50 kWh capacity.

That’s as a result of the CJ Surge’s 35-inch BF Goodrich all-terrain tyres, 2-inch lift kit, and attention on off-road capability during the design and construction phases. Thanks to the front and rear Jeep Performance Parts Dana 44 Crate axles, you can even anticipate respectable rock crawling.

The CJ Surge idea includes cosmetic improvements like as new LED headlights, Wrangler JK Rubicon bumpers, and a Warn winch. Copper Canyon is used for the exterior’s finish, with gloss black and Surf Blue accents. A Wrangler JK centre console, fresh, custom seats, and a cropped windscreen are all inside the cabin.

Although a production model of the concept is not planned, Mopar claims it is investigating “a future propulsion-system solution for enthusiasts to modify or convert antique and contemporary cars and trucks into zero-emission vehicles.” 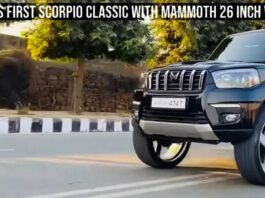 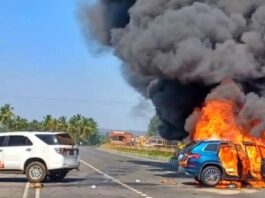 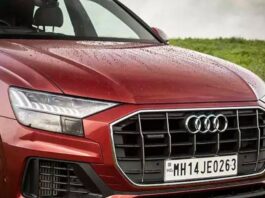