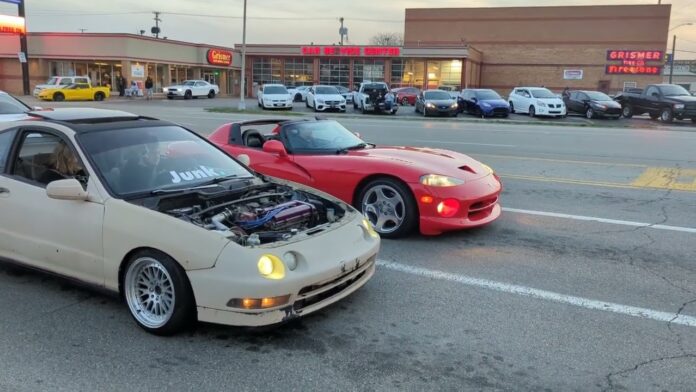 How strong is your willpower? Can you go out with your friends on a Friday night and only drink soda since you’re supposed to be getting in shape for summer? And with a stoplight ahead of you and a hoodless Acura Integra in the adjacent lane, how could you not show him that your old Dodge Viper RT/10 is no match for him?

We can’t comment on the Viper driver’s diet resolution in this short clip, but he didn’t hesitate to show the shabby Acura who was boss. And for about three seconds, he was truly in charge, until he tried to fuse his V10 classic with a massive pole.

According to the caption beneath the YouTube video, the movie begins with an immaculate-looking first-generation Viper pulling up to a stoplight next to a very scruffy Integra on a public road during a Dayton, OH, car show. The Viper driver appears to be around 20-30 years older than the Acura driver and his girlfriend, and both drivers make every effort to appear comfortable and unconcerned about each other. That’s correct.

When the light turns green, the front-wheel-drive Teg keeps up with the 8.0-liter, 400-hp (406-PS) Viper for the first few feet, but the Viper has moved ahead by the time the duo has reached the intersection. And it’s a good job for the Integra driver, since the Viper swerves sideways in front of the Acura, probably when he shifts into second gear, before smashing into a pole on the sidewalk.

The audience hurries forward to get a good look at the destruction just in time to witness the confused Viper driver slowly emerge from the wreckage of his formerly gorgeous car and meander off into the throng, unsure how he’ll handle his insurance company and the cops who are only seconds away.

Would you be hesitant to show off your car’s performance if there were a bank of phone cameras on the side of the road ready to catch your worst blunder? Please let us know by leaving a comment.