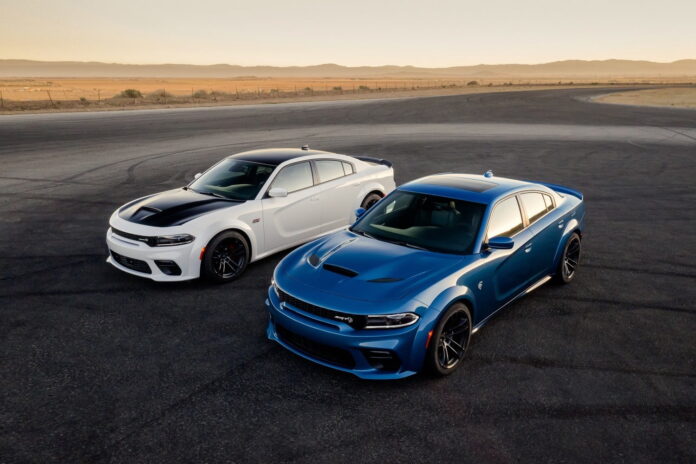 The Dodge lineup usa have most powerful cars. A lot of cars from SRT lineup have just phenomenal performance. Their cars are right now moving towards electric lineup but enthusiasts still love the ICE engine cars from the brand. Here are the most powerful car like Dodge Durango SRT, Dodge Charger SRT Redeye and Dodge Challenger SRT Superstock in the lineup.

The Dodge Durango SRT is the most powerful Durango on offer. It’s a well known SUV for its towing capacity upto 8700 pounds. There a 6.4-litre Hemi V8 engine on offer with 475 HP of power which is less than Charger Scat Pack and Challenger Scat Pack with same engine. The model comes with an option of All wheel drive like other Dodge cars.

A lot of Dodge Challengers are just making their ways in the list. This shows that Dodge has a lot of capability. The Dodge Challenger Scat Pack has a Hemi V8 engine with 485 horsepower on the offer. This same engine is also shared with Dodge Charger Scat Pack.

The Dodge charger SRT Redeye is one of the fastest sedan in production. There is a 6.2-liter V8 with 797 horsepower on the offer. A lot of enthusiasts will just fall for the Charger Redeye in looks. Dodge just invested a lot of time for such fearful sedan. The horses are even more than standard Hellcat Redeye. If a buyer wants to choose a new colour shade then jailbreak edition is just insane. The Charger SRT jailbreak is 10HP powerful than the Hellcat Redeye.

The Challenger SRT Hellcat Redeye is one the available in the Dodge lineup USA with a lower state of tune. A lower tune Supercharger is offered with 6.2-liter V8 due to which the power output is 797 HP. Those who can live with a bit lower state of tune can get the Hellcat. The hellcat is just 10 HP behind SRT jailbreak and SRT Superstock. A wise man said that a person who came second should also be remembered. In the case of cars, the Hellcat Redeye is second but still a legend. A lower state edition SRT Hellcat with 717 HP of power is also available in American lineup.

The Dodge Challenger SRT Superstock is the most powerful Challenger in 2022. It’s because the 6.2-liter V8 which has a high output supercharger. The high out engine is capable of making 807 HP of power making it most powerfull Dodge in the lineup. Those who love muscle cars will love the Dodge Challenger SRT Superstock. One thing to be kept in mind before getting one is to follow traffic rules. If there are speed limits then surely it maybe a traffic source for traffic police for heavy fines. Jokes aside but the SuperStock just always rock.