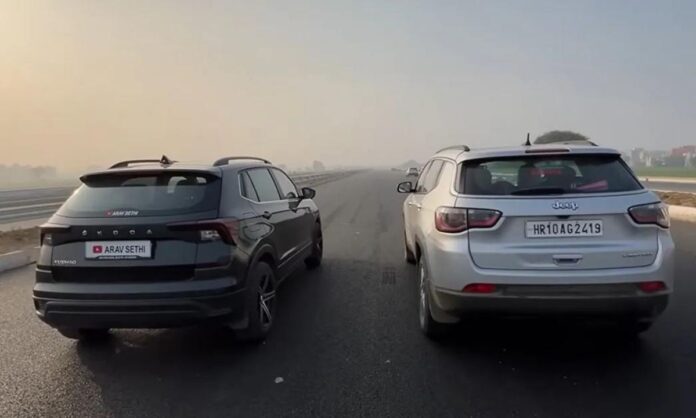 Drag racing is becoming increasingly popular among Indian car YouTubers and their audiences. This is why we are seeing so many drag-racing footage on this video-sharing site these days. In the most recent turn of events, two mid-size SUVs from two renowned automakers from Germany and America were pitted against each other in a drag race. Skoda Kushaq represented Germany in this competition, while Jeep Compass represented America. However, before we go, we would like to point out that, while Skoda is a Czech carmaker, it is owned and controlled by the German automaker Volkswagen.

Pratham Shokeen shared the footage of these two mid-size SUVs drag racing each other on his YouTube channel. He’s previously posted a slew of drag racing films on his YouTube. The presenter begins the film by stating that they would be racing his friend’s Skoda Kushaq against a Jeep Compass. He goes on to say that he has no clue which of these two SUVs would win because he feels the Skoda Kushaq is a quick SUV while the Compass is more powerful but still a touch heavier.

He next introduces the SUVs and describes their configuration. He begins by describing the Jeep Compass as a diesel turbocharged SUV, and the Skoda Kushaq as a petrol-turbocharged car. In the video, the Jeep Compass produces 170 horsepower and 350 Nm of torque, while the Skoda Kushaq produces a maximum of 114 bhp and 178 Nm of torque. He says that both SUVs have manual transmissions and that the Kushaq has a three-cylinder engine while the Compass has a four-cylinder engine. The presenter also claims that both of these SUVs have soft limiters, making a proper launch difficult on both of these models.

The host then enters the Skoda Kushaq and sets the stage for the drag race. He claims that they will race with both cars’ traction control and air conditioning switched off. He also notes that because there would be more persons in the film shoot, both SUVs will have three passengers. The presenter also mentions that because both of the SUVs are manual, there is no sports mode or driving mode choice. Following that, the first drag race begins, with the Skoda getting a strong launch while the Jeep Compass stalls behind. They then disclose that the Compass driver neglected to depress the handbrake.

Later, the first round begins, and the Jeep Compass easily wins after a strong start. The Skoda too had a strong start and stayed up with the Compass, but it soon lost up and fell behind. They then decide to send one passenger from Kushaq to Compass for the second race. Even after this weight redistribution, the Compass wins and the Skoda Kushaq falls behind. For the third race, the presenter drives the Compass while his friend drives the Kushaq, and the Jeep comfortably wins.

The Jeep Compass occupants turn on the air conditioner for the fourth race. The race is then started, but the presenter is unable to transfer gears at the start, so it is restarted. The Skoda Kushaq loses again again, although it does manage to stay up with the Compass for a few seconds before being dusted for the final time.