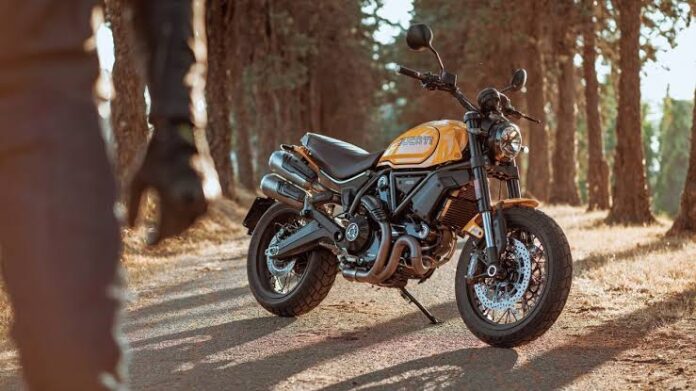 The 2022 Ducati Scrambler 1100 Tribute Pro has been unveiled in India, with a price tag of Rs. 12.89 lakh (ex-showroom, India). The Scrambler 1100 Tribute Pro is a one-of-a-kind motorbike designed to honour the legacy of the air-cooled twin-cylinder engine, which made its debut on a Ducati motorcycle in 1971 with the Ducati 750 GT. The Scrambler 1100 Pro is dressed in a special “Giallo Ocra” livery that includes a black frame and sub-frame, as well as a brown seat. It is the Italian brand’s first product launch in India for 2022.

Bipul Chandra, Managing Director of Ducati India, commented on the debut, saying, “The Scrambler 1100 Tribute Pro stays true to the Scrambler DNA while also paying homage to the history of the Borgo Panigale through the unique “Giallo Ocra” livery. Our first launch this year, the Scrambler 1100 Tribute Pro is a distinctive offering celebrating the iconic air-cooled L-Twin engine and it’s great that Ducatisti from India can also get their hands on this exclusive edition.”

Aside from the visual cues, the motorcycle has all of the contemporary technology and amenities found on the Scrambler 1100 Pro series. The same 1079cc L-twin engine with desmodromic distribution and air cooling powers the bike, producing 85 horsepower at 7,500 rpm and 88 Nm of peak torque at 4,750 rpm. The motor is mated to a 6-speed gearbox, with a wet multi-plate clutch with hydraulic control and a servo-assisted slipper function to prevent rear-wheel destabilisation during downshifts.

The distinctive colour Ducati picked for the Scrambler Tribute 1100 Pro was popular in the 1970s, according to Ducati, and it was also utilised by Borgo Panigale on the twin-cylinder 450 Desmo Mono and 750 Sport of 1972. This tribute also pays homage to the 750 Supersport used by the Spaggiari squad since 1975, which coincided with the commencement of another legendary Ducati rider’s career – Franco Uncini. The new Scrambler 1100 Tribute Pro also features the famous 1970s Ducati emblem designed by Giugiaro, black spoked wheels, circular rear-view mirrors, and a brown seat with specific stitching, in addition to the special livery.

The motorcycle has LED taillights, a dual-element LCD instrument cluster, and 18-inch spoked wheels in the front and 17-inch spoked wheels in the back, both with Pirelli MT60 RS tyres. There’s also a USB port for charging your phone under the seat. The bike comes standard with Cornering ABS and Ducati Traction Control, as well as three riding modes: Active, Journey, and City.