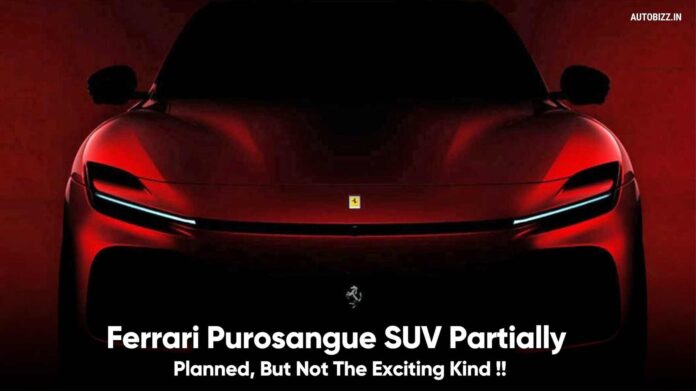 An official debut is coming later this year.

It’s been a long time coming, but we finally have our first official look at Ferrari’s new SUV. We’re treated to a head-on perspective of the Purosangue that displays a smiling face, a frightening stance, and two prancing horses in plain view, according to a darkened photograph shared on its social media accounts.

Obviously, this is simply a Ferrari teaser image. This perspective of the divisive SUV has more shadow than light, and that’s after we increased the light level slightly. Ferrari’s social media posts were mostly dismal, with a few bright spots.

We went ahead and turned the lights all the way up out of curiosity, and to our amazement, there’s a full SUV hiding in the darkness. It’s not the most appealing image, and many elements remain hidden. However, here’s a sneak peek at how the Ferrari Purosangue will seem in your rearview mirror as you cruise around Monaco.

Read More: How Much Does A Ferrari Actually Cost?

We first learned about the Purosangue in 2018, when Ferrari included it in a future product plan. Of course, that was before a global pandemic and a war wreaked havoc on the motor sector, but the Purosangue has persevered. Ferrari’s website features a note in addition to the teaser image “Be prepared for a true game-changer. Later this year, all will be disclosed.”

To Ferrari’s credit, the Purosangue has been successfully kept hidden. Most of our spy photo sightings have been test mules wearing janky bodywork from the Maserati Levante, both figuratively and physically. Some speculated that the Purosangue would be a Maserati rebadged, but it will be built on Ferrari’s innovative front-mid-engine layout. V12 power is expected, as well as a hybrid V6 variant akin to the 296 GTB’s configuration.

We’ve only recently started seeing actual Purosangue prototypes being tested in public, heavily camouflaged. With Ferrari now releasing a shockingly revealing teaser, those camo covers are likely to be removed sooner rather than later. In any event, the first Ferrari SUV is set to hit the market this year.