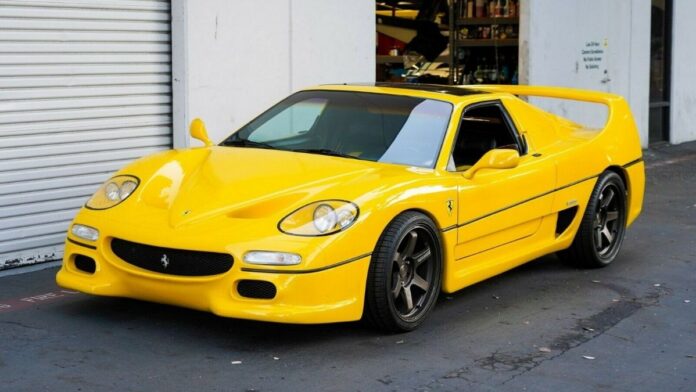 The Ferrari F50 may not be as legendary as its predecessor, the F40, but it ranks among the top supercars of the 1990s thanks to its F1-derived V12 engine. The replica firm built the shown imitation based on a lowly 1985 Pontiac Fiero GT for folks who admired the F50 but couldn’t buy it.

The good news is that, as the F50 has become more costly, copies have become more affordable, and this one is presently for sale on eBay. According to the vendor, this is a “high-end construction” from the early 1990s, with a conversion cost of more than $80,000. While this quantity may appear excessive, the car’s unique body panels are all composed of fibreglass and are designed to closely mimic the original F50.

The end effect resembles a life-size replica of low-cost Ferrari-themed plastic toys. It isn’t the worst Fiero-based imitation, but the messed-up proportions, with the swollen front bumper emphasising the happy appearance, won’t deceive anybody.

Despite its shortcomings in design, the copy looks to be in fair condition for its age, at least from afar. When the car is fully locked, the tyres scrape on the fenders, revealing damage to the fibreglass body. The depicted Rays T37 wheels are not included in the sale, since the car will be delivered with its original Ferrari-style rims to the next owner.

Black and yellow leather on the seats and door cards, as well as a few of Ferrari insignia, provide some personal touches to the interior. The Fiero underpinnings are revealed when the large back deck is opened, with the mid-mounted 2.8-litre V6 providing power to the rear axle via a three-speed automated gearbox. Since the genuine F50 is one of the greatest sounding supercars on the market, we expect the difference in sound to be even larger than the difference in appearance.

In October 2021, the F50 imposter made a cameo on the “throtl” YouTube channel, where the crew supposedly purchased it for a “crazy fantastic bargain.” It had considerably more ground clearance, as you can see in the video above. The vendor claims that the replica recently received a new set of rotors/brake pads as well as a lowering package.

The starting price on the eBay auction is $20,000, and no one has expressed interest as of this writing. How much would you be willing to pay for the novelty of having a phoney F50?