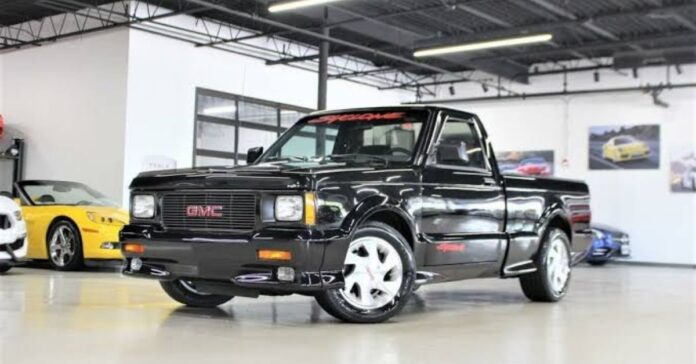 The GMC Syclone is a high performance pickup truck produced in 1991. Back in the 90s the Syclone had set the benchmark real high. GMC claimed it to be ‘quickest accelerating pickup truck’ and ‘Fastest Pickup Truck ever made’ and the performance figure of the Syclone prove it to all. It is a rare find as less than 3,000 Syclone are ever made. The pick-up was only offered in the Black shade by the OEM. The GMC Syclone was a stree racing machine. The company had strictly prohibited to take it for off-roading. Yes you read it right, it was a pickup truck but can’t off-road. The performance figures speaks for the vehicle itself. This blog is all about the GMC Syclone.

Under the disguise of a pickup GMC upholds an amazing power machine. The performance figures of the Syclone were extreme at its time. It was the quickest pickup truck to be produced in 1991. GMC Syclone accelerated from 0-60Mph(97kmph) in whooping 4.3 sec. It is said to have a top speed of 126 mph (203 KPH).

You May Like:  GMC Hummer EV SUV Unveiled, To Hit The Market By 2024

The GMC Syclone is one of the coolest Pick-up truck from the 90s. The Syclone was the first production truck to get a 4-wheel anti-lock braking system. The Syclone was produced in 1991 to 1992. In total, 2,998 Syclones were built. The Two Door Pickup truck was only offered in black colour. It was based on the GMC Sonoma pickup truck.

The GMC Syclone was available for the Price of $29,790 . It was definitely a nightmare for supercar owners back then. We wish we could have able to see this rocket pickup on streets. The rarity of this truck and the history is absolutely appreciable. This pickup truck is now collectors delight.