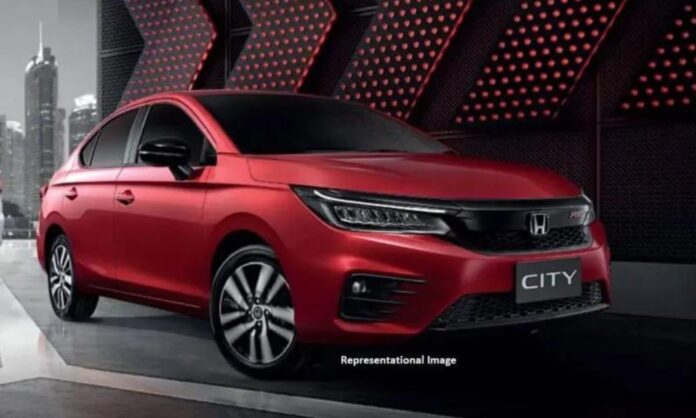 Honda City Facelift To Be Launched By March 2023 – Report

Honda Cars India is preparing a mid-life refresh for the country’s best-selling City car. A recent media source claims that the new 2023 Honda City facelift will go on sale in March. The vehicle will most likely see minor changes both inside and out, with the original powertrains remaining. In addition, the automaker may eliminate or add certain new versions to the revamped inventory. The new City’s test mules have shown some of its visual modifications, like as freshly designed alloy wheels and altered taillamps.

The front fascia will be updated with a bigger black grille that will replace the broad chrome bar. It will also get a new bumper, enormous air dams, and a revised fog lamp assembly. There are no plans to update the internal arrangement. The sedan, on the other hand, might gain a wireless charger and cooled seats.

The new Honda City redesign for 2023 will have two engine options: a 1.5L normally aspirated petrol and a 1.5L Atkinson Cycle petrol hybrid. While the former has a peak power of 121bhp, the latter claims a power of 126bhp. Mileage numbers will stay unchanged, at 18.4kmpl for gasoline and 26.5kmpl for diesel (for the petrol hybrid). With the impending stricter pollution standards, Honda will phase out the 100bhp, 1.5L diesel engine. A 6-speed manual, CVT, and e-CVT will be available as transmission options (only for the petrol hybrid variant).

The Honda City car is now available for between Rs 11.87 lakh and Rs 15.62 lakh (all, ex-showroom). The Hybrid ZX eHEV variant is priced at Rs 19.89 lakh. The facelifted version may see a minor price increase due to minor cosmetic changes and feature upgrades.

Following the facelift of the City, the Japanese automaker will launch a new model in the highly competitive mid-size SUV segment. It is expected to be introduced around mid-2023, with a market debut occurring during this year’s holiday season.

This Mean-Looking Ford Ranger Is Ready To Rally Race In South...