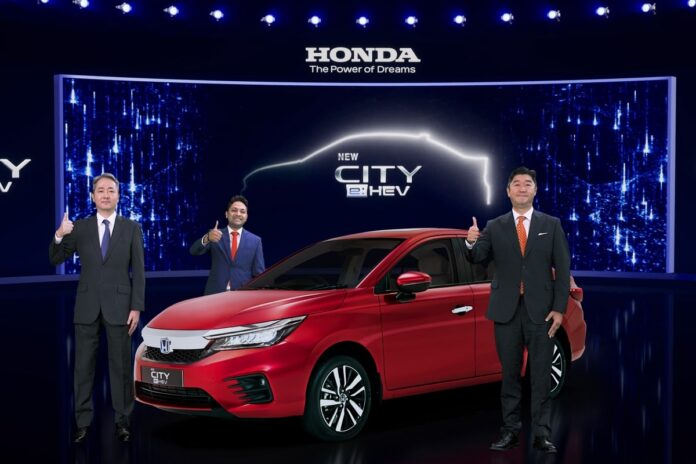 For the Indian market, Honda has revealed the new City Hybrid. It will be offered in only one fully equipped ZX model and will go on sale on May 4th. Honda dealerships are now taking reservations for the new car. The Honda City Hybrid has now been dispatched and is making its way to dealership yards. Here are a few photos of Honda’s first mass-market hybrid sitting in a dealership parking lot.

The City Hybrid, or City e: HEV as Honda like to call it, is finished in a plain white color in the photos. Honda has made various visual tweaks to set it apart from the ordinary City. The fog lamp housing has been rebuilt, and LED fog lamps are still included. The grille is unique in that it has a mesh pattern. A false diffuser with a carbon fiber impression and a boot lid spoiler can be found at the back. A blue halo has also been added to the Honda insignia, indicating that the car is powered by a hybrid powertrain.

The inside is currently decorated in an ivory and black color scheme with wood accents. This gives the cabin a sporty look. The standard City, on the other hand, has a dual-tone black and beige cabin theme that looks more luxurious. The instrument cluster and infotainment system are identical to those found in the normal City, although they have been upgraded to reflect the current speed.

Because of the additional set of batteries in the boot, the boot space has been reduced. The City Hybrid is projected to have a boot size of 300-something litres, compared to the stock City’s 506 litres. The weight has increased by 110 kg as a result of the added batteries. Honda has fitted rear disc brakes to accommodate the extra weight.

The City e: HEV is powered by a 1.5-liter petrol engine with an Atkinson cycle. It has two electric motors attached to it. The torque output is 253 Nm and the combined power output is 126 PS. There is only one transmission available: an eCVT. There are three driving modes: electric, and hybrid-electric.