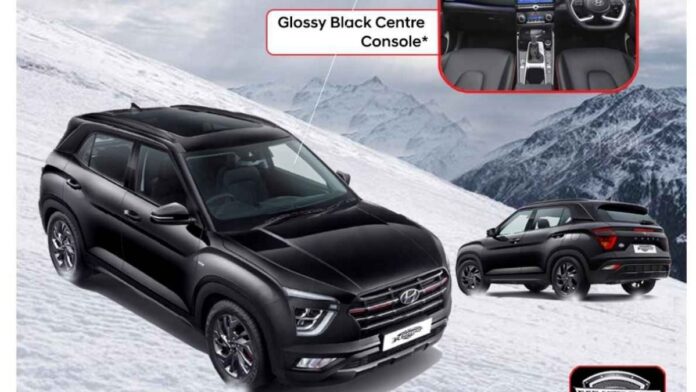 For many years, the Hyundai Creta, currently in its second generation, has been the best-selling C-SUV. The popular compact SUV is no longer in the spotlight, thanks to the entry of tech-laden rivals (read: Mahindra XUV700 and MG Astor). Thankfully, Hyundai Motor India Ltd is not one to rest on its laurels, and the updated Creta and Alcazar will be released later this year (read more HERE). However, before releasing the upgraded model, the automaker will release a limited-edition pre-facelift model to make the most of the current model. The new model, dubbed Hyundai Creta Knight Edition, has been leaked online.

Several cosmetic improvements have been made to the special edition to give it a bold appearance. The entire automobile, including the ‘Lightning Arc’ motif on the C-pillar, is completed in black. Red highlights can also be found on the grille, which is devoid of chrome in favor of a gloomy appearance. In fact, the all-black theme has been taken to such extremes that even the false skid plates are black. Meanwhile, the metal rims have lost their dual-tone ‘diamond cut’ treatment and have been coated dark grey, identical to the 1.4 Turbo variant.

A Knight Edition badge on the tailgate, red-painted brake callipers, and black-painted roof rails are among the other embellishments. The new model will be offered in S and SX(O) trims and will have 1.5-litre petrol and diesel engines. The 1.5 S Petrol MT, 1.5 S Diesel MT, 1.5 SX(O) Petrol IVT, and 1.5 SX (O) Diesel AT will be the four variations available. For the uninitiated, the Creta’s 1.5-litre naturally aspirated petrol engine produces 115PS of peak power and 144Nm of peak torque. There are two transmission options: a 6-speed manual and a CVT (IVT in Hyundai speak). The oil-burner, on the other hand, produces 115 horsepower and 250 pound-feet of torque, with a 6-speed manual and a 6-speed torque-converter automatic transmission as choices.

While exact interior details are unavailable at this time, we anticipate an all-black concept with red accents. This will be comparable to the Turbo version. The upholstery will be completely black with red stitching. The dashboard will also have some red highlights. In terms of equipment, the normal version’s S and SX(O) trims should be comparable.