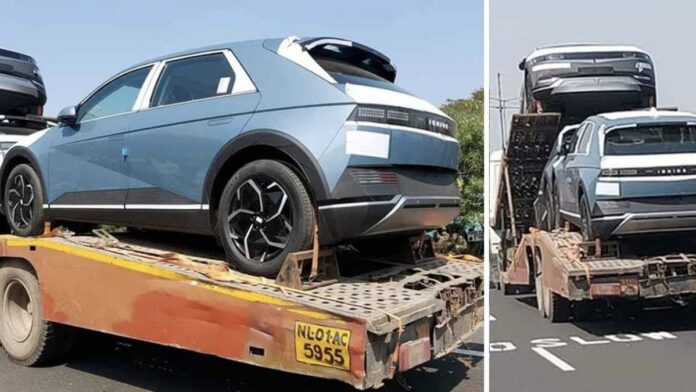 In India, the Hyundai IONIQ 5 is a much-anticipated electric vehicle. The addition of the Kia sister expands the company’s foothold in the electric mobility market. The new vehicle is likely to have a sleek and stylish appearance. Import units of the Ioniq 5 have now been observed on the NH2 in the middle of their journey (near the Burdwan District, West Bengal). Because eastern India is connected to several of the neighboring landlocked countries, it gets to see a lot of new automobile models before they’re officially released because they’re frequently moved there. Let’s take a peek at Hyundai’s forthcoming electric vehicle.

The Hyundai Ioniq 5 electric car, as seen in the video above, has a retro-futuristic appearance. A Sly Blue theme with White highlights and a Black pattern may be seen. The attractive alloy wheels are designed in a Black and White color scheme. The new EV has a stunning look and a sophisticated body style. It has crisp and elegant lines. In addition, the Hyundai IONIQ 5 features aerodynamic 20-inch wheels and a front end with pixel-inspired lighting. Overall, Hyundai’s design language is reflected in the future EV. Many new electric cars from the brand will join it, including Venue Electric, Creta Electric, and others.

Last year, Hyundai introduced the Ioniq 5 electric automobile to the world. It has, however, been given a makeover. Hyundai’s Electric Global Modular Platform serves as the foundation for the electric SUV (E-GMP). It has a range of nearly 500 kilometres and is powered by a 77.4 kWh battery pack. Optional digital mirrors (including a Digital Centre Mirror (DCM)), Smart Frequency Dampers (SFD), and other features are available on the new model. Hyundai is anticipated to bring the Hyundai Ioniq 5 to India via the CBU route. This could result in a higher price tag (thanks to the duties and taxes).

Must Check These Before Buying Car