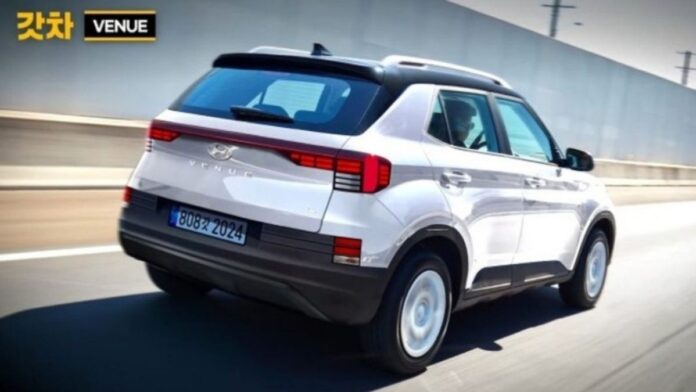 The Hyundai Venue is an important and popular product in the country’s compact SUV market. It’s also the most competitive, with nearly all of the major OEMs represented.

According to our dealer-level sources, the Hyundai Venue facelift will be released in July of this year. The trend of tiny SUVs is still going strong in the market, with continuous sales month after month. For a long time, the venue has been a part of this sector. With Tata Nexon and the incoming Maruti Brezza posing fierce competition, a facelift is long overdue. Let’s talk about the adjustments that might be expected at the new venue.

What The Leaks Says

According to numerous leaked images on the internet, the facelifted Venue will have a front fascia that is similar to the international-spec Tucson’s, including a parametric grille, integrated LED DRLs, fog lamps, and projector headlamps down on the bumper, sporty bumper, and skid plate, stylish alloy wheels, tall stance, relatively unchanged rear end with LED taillamps, and generous use of chrome throughout the body. Roof rails, a stylish rear bumper, an integrated roof spoiler, a shark fin antenna, and other exterior features will be included to make it as appealing as possible. This will be critical if it wants to compete with the bold Nexon, sleek Sonet, and the impending sophisticated Brezza.

The Hyundai Venue is available with a variety of engines, including a 1.2-liter normally aspirated petrol with 82 horsepower and 113 Nm, a 1.5-liter diesel with 100 horsepower and 240 Nm, and a new 1.0-liter turbo petrol with 120 horsepower and 171 Nm of peak power and torque. Manual, iMT, and DCT gearbox choices are available for these engines. The Venue’s pricing range from Rs 6.99 lakh to Rs 11.87 lakh, ex-showroom. When the facelift is released in July, there may be a little premium over this pricing.

Over the last few years, this market has gotten extremely competitive. Nexon has excelled itself and is the one to beat, with the impending Brezza likely to add to the excitement. In the end, all of this rivalry benefits the customer because he or she will have a wide range of options to pick from.

Read More: Why is Volkswagen Not Launching the New Polo in India?

Top 5 Cars To Buy Instead Of Creta