The driver and passenger walked away, but the C7 ‘Vette sure didn’t.

It’s never a good idea to take track days lightly. Even on the safest track, driving a car with limited power to the wheels, this is true. Willow Springs Raceway is a difficult track, and a C7 Corvette Z06 is far from low-powered. Still, let this film serve as a reminder that trouble might strike at any time.

A recent excursion to Willow Springs in a yellow Z06 is seen in the video. As the video is titled Steve’s Z06 Corvette at Willow Spring Raceway, it’s likely that Steve is the owner and driver of this ‘Vette. The action starts as Steve and a passenger leave the pits after putting up the Performance Data Recorder on the Corvette (PDR). The action is being recorded by the passenger, and the camera then flips to the PDR, which shows the Corvette driving around turn one at a speed of roughly 67 mph.

The issue isn’t with the corner exit or turn two. We witness the car accelerate on the short straight before the back end abruptly leaps out at roughly 80 mph. A rapid left fishtail is overcorrected, sending the car going off the right side of the track and onto a large berm, where it appears to have rolled at least twice. The video then flips to a passenger’s perspective, revealing that the driver was actually driving slowly through the turn and straight. We’re wondering if a tyre lost pressure or if there was something slick on the track because of the way the back end steps out.

Read More: The Deadliest Cars on The Road Today

That’s the brutal portion of the video, as we hear the sickening crunch of glass and fiberglass as the car rolls. A groan from someone gives us pause for concern, but it’s soon followed up by a confirmation that everyone is okay. With another jump cut to the pits, the man who we assume is Steve summed up the crash in a very simple sentence: “Too much power, not enough grip.”

In stock trim, the C7 Z06 produces 650 horsepower (485 kilowatts) so even without modification, it can be quite a handful. We don’t know how long Steve had the car (the Hertz sales sticker in the window has us a bit worried) but we’re obviously glad everyone walked away without injury.

Whether having fun on the track or cruising on the street, stay safe everyone. 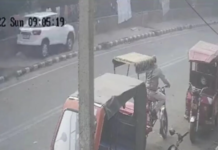 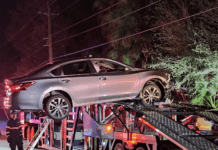 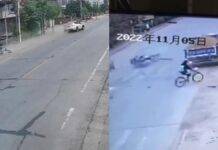