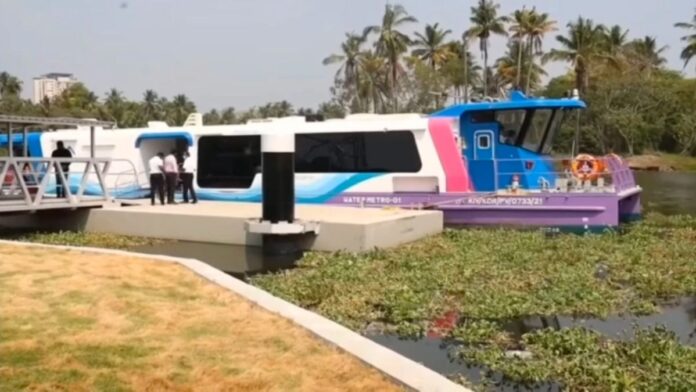 In certain cities, the metro has revolutionized the way people travel. It has proven to be a huge success and a great way for people to travel big distances. Kochi is now home to India’s first water metro system. People who reside on islands or who must travel to islands for business can benefit from the water metro.

The water metro appears to be a cross between a train and a boat in the video. It’ll be painted in a lovely tone of white and blue. There will be a total of 38 terminals on the water metro, which will connect ten islands. To connect these islands, 78 water metros will be used.

The water metro’s stations are identical to those of the regular train metro. People can be seen using the water metro in the video. The development of five additional terminals is now underway. By June of this year, they should be completed. Cheranelloor, High Court, Bolgatty, Vypeen, and South Chittoor terminals are in the final phases of construction. Furthermore, the terminals in Eloor, Kakkanad, and Vytilla have already been constructed. Kochi Metro Rail Limited, or KMRL, is the organization in charge of all of this.

The Vypeen-Bolgatty-High Court segment is the water metro’s first route to become operational. Cochin Shipyard Limited is constructing the metros (CSL). As previously stated, one boat has already been delivered, and the remaining boats are on their way and will be delivered in the coming months.

The first water metro trial runs took place in March. It was carried out between the terminals of Vyttila and Kakkanad. The boat traveled a distance of 5 kilometers in 20 minutes during the trial run. After Cochin Shipyard Limited delivers at least 5 boats to Kochi Metro Rail Limited, the Water Metro service will be completely operational. This isn’t the first time the city has offered such transportation service. A boat service existed previously, but it was unable to attract consumers due to the lack of feeder services from the Kakkanad jetty region. As a result, it appears that the water transportation agency will be responsible for resolving this issue as well.

There have been 15 routes classified as routes so far. These links will connect 38 terminals and boatyards located across ten islands. The 15 routes cover a total distance of 76 kilometers. These paths will let islanders in the Vypeen, Mulavukad, Vyttilla, Kakkanad, Eloor, Nettoor, Kumbalam, Wellington, Bolgatty, and Edakochi districts travel more easily.