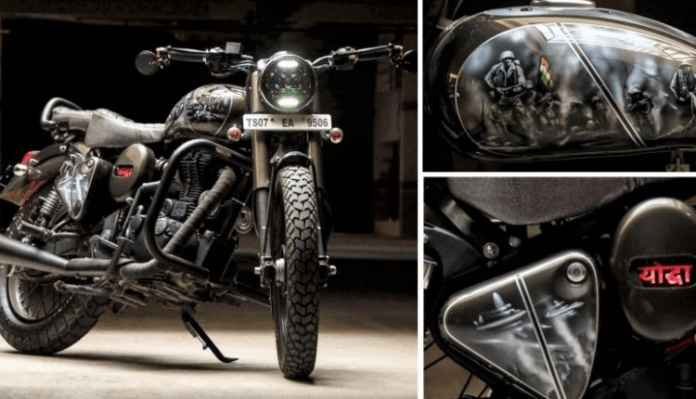 Simply interesting is the Royal Enfield Classic Yoddha by EIMOR Customs. Yoddha was designed with a purpose and is more akin to a work of art than a motorcycle. The owner’s son, who had a passion for military personnel, had a suggestion for how EIMOR could improve this Classic to make it the most distinctive device of its kind. At first, an army theme was chosen, but a 5-year-old boy would have felt too familiar with it. EIMOR painted the motorcycle with images of soldiers bearing the Indian flag and preparing for battle rather than allowing the shade speak for itself.

The motorcycle received a fantastic paint job from EIMOR, who kept the front fascia in tact and installed an aftermarket LED headlamp in its place. Dual-purpose tyres and black-painted rims added finishing touches to the work. For improved comfort and style, they chose a luxurious, custom seat cover with diamond quilting and additional padding. Here, the rear fender is bespoke, and both side panels are painted in a military-inspired style with fighter jets and battle scenes. The factory-installed chrome exhaust is replaced with a black one, and the exit is taped in black for heat protection. The war-themed paint treatment is also applied to the front and back fenders.

In addition to this, EIMOR used oval side panels with the word “Yoddha” and bar end rearview mirrors, bespoke brake lights, and flat crash protectors. Yoddha’s engine has been completed in Matt Black. This modification is available for both the Classic 350 and Classic 500, but the price is not specified. While the rear disc brake is now included on both types, the front disc brake remains the same as the Classic series. A 346cc, single-cylinder engine with 19.8 BHP and 28 Nm of torque powers the Classic 350. The 499cc engine in the Classic 500, on the other hand, is capable of enormous torque of 41.4 Nm and 27.2 BHP.