Is 2022 Mahindra Scorpio About to Launch? Seen During Ad Shoot 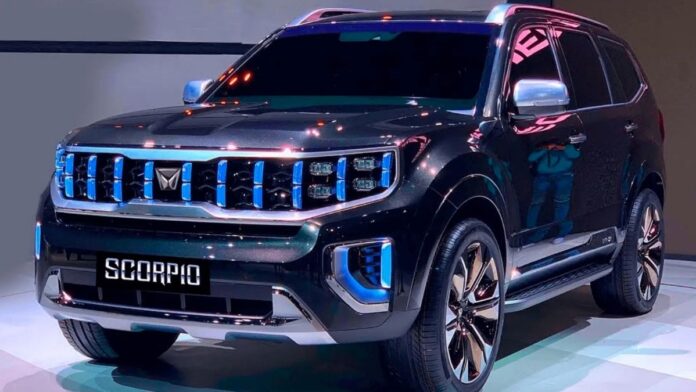 2022 Mahindra Scorpio is about to be released. The SUV’s new design has now been showcased in a TV commercial.

The Mahindra Scorpio 2022 has been under development for quite some time. So far, we’ve seen a slew of spy photos and videos of the next-generation vehicle, and it appears that the new SUV has been on the road for quite some time. The all-new Scorpio, however, could be now actually close to launching as it has been spotted during a TVC shoot. New twin projector LED headlamps, integrated DLRs, an air dam with a honeycomb mesh pattern, and more were featured in the leaked photo.

According to recent rumors, the Mahindra Scorpio 2022 would be equipped with a set of attractive dual-tone alloy wheels. On both sides of the front grille, new twin projector LED headlamps will be installed (with integrated DLRs and turn indicators). New LED fog lamps with C-shaped casings are also included in the revised bumper. An air dam with a honeycomb mesh pattern is also present. Body-colored ORVMs and door handles can be seen on the side. Massive wheel arches with big wheels and silver-colored multi-spoke alloys will be featured on the next-generation vehicle. A sidestep, roof rails, and a thin plastic covering on the door sills are also noteworthy.

The ruggedness, space, and presence of the Mahindra Scorpio are well-known. The new model will be much more contemporary. It’ll have an all-black interior with dual-tone leather upholstery and a redesigned dashboard, according to reports. The automobile will be driven by a 2.2-liter mHawk diesel engine with 130 horsepower and a 2.0-liter mStallion petrol engine with 140 horsepower. The SUV will be available with both a 6-speed manual and a 6-speed automatic powertrain. Only closer to the launch will the full specifications be released.

The new Scorpio 2022 will most likely be sold as the ScorpioN or Scorpio Sting by Mahindra. Prices will almost certainly be greater than the existing Scorpio. A vertically positioned touchscreen, improved ergonomics, all-wheel drive, strong character lines, a muscular attitude, and a seven-seat arrangement are all anticipated to be included in the next-generation Scorpio. It’s also likely to collaborate with the Thar on powertrain possibilities. The 2022 Mahindra Scorpio is fundamentally a new car, despite its boxy and upright silhouette.

The Mahindra SUV has now priced between Rs 13.18 lakh and Rs 18.14 lakh (ex-showroom Delhi). S3+, S5, S7, S9, and S11 are the five trim levels. A 2.2-liter diesel engine with 120PS/ 280Nm or 140PS/ 319Nm powers the nine-seater automobile. While the base model comes with a 5-speed manual transmission, the other models come with a 6-speed manual transmission. Cruise control, automatic air conditioning, a 7-inch touchscreen infotainment system with Bluetooth and AUX connectivity and auto headlights with LED DRLs are all included in this popular vehicle. Dual front airbags, rear parking sensors, ABS, and speed alert are among the safety features.

Volkswagen Aero B Teased And Confirmed For 2023 Launch