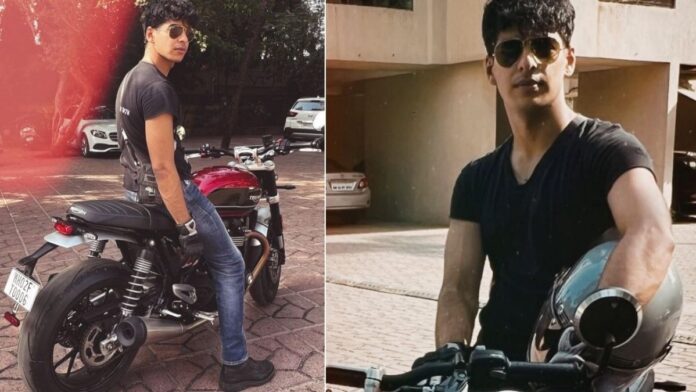 Ishaan Khattar, a Bollywood star, has purchased a new Triumph Bonneville Speed Twin. He has been in films such as A Suitable Boy and Dhadak, and he will next be seen in Pippa and Phone Bhoot. The Speed Twin is a neo-retro roadster that belongs to the Bonneville series of Triumph motorbikes. The motorcycle is priced at Rs. 11 lakhs ex-showroom, with an on-road price of Rs. 13 lakhs.

Ishaan chose the Red Hopper color, but the Speed Twin comes in Jet Black and Matt Storm Grey as well. Ishaan Khattar’s brother, Shahid Kapoor, gave him a helmet. Last year, Triumph released an upgraded version of the Speed Twin. The motorcycle was released following the implementation of the BS6 emission standards, which resulted in price increases.

The majority of the components were kept, resulting in the same frame, feature equipment, and electronics package. Rain, Road, and Sport riding modes, as well as Traction Control and Anti-Lock Braking systems, are available. The frame is based on the Triumph Thruxton and features a twin cradle design.

A new version of the engine has been released. The 1200cc parallel-twin motor in the Speed Twin is liquid-cooled. It’s dubbed a “High Power” engine by Triumph. A redesigned intake system, new high-compression pistons, new cam profiles, lighter internals, and a brushed finish for the exhausts were all added to the engine.

All of this contributed to the engine’s increased power output. At 7,250 rpm, it now delivers 100 PS of maximum power and 112 Nm of peak torque. The power output was boosted by 3 PS but the torque output remained unchanged; however, the torque now comes at 500 rpm earlier and is uniformly distributed. The engine is still connected to a 6-speed transmission with a slip and assist clutch.