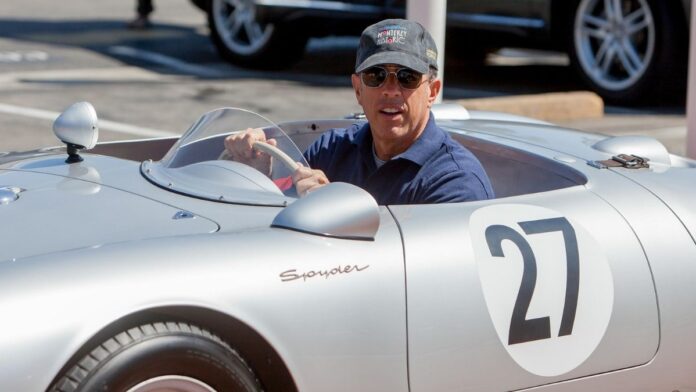 One of the most well-known comedians in the world is Jerry Seinfeld. During the 1990s, his beloved sitcom was the pinnacle of television success. Seinfeld, a major car lover in his own way, built a sizable automobile collection as a result of his celebrity and riches. He has always been a big fan of Swedish and German automobiles, and he doesn’t hide it. Seinfeld is proud of his automobile collection, whether he’s visiting one of the auction circuits or swapping cars with fellow collectors.

Aside from the Ford Model T, the Volkswagen Beetle is arguably the most iconic automobile ever produced. Classic versions, therefore, command a high price. A spotless 1960 Volkswagen Beetle will typically sell for roughly $30k, but Seinfeld’s Beetle shattered industry records by selling for $121,000 at auction.

Although Seinfeld’s collection is primarily comprised of Porsches, he also owns a few unusual BMW automobiles. The BMW 300 Isetta is a one-of-a-kind microcar that was sold in Europe during the 1950s. The 300 Isetta was the first mass-produced automobile to attain a fuel economy of 94 miles per gallon, and it sold over 161,728 units. Despite the fact that the 300 Isetta’s performance was not very thrilling, the automobile managed to sell successfully.

For Seinfeld, it’s not all about the tiny German and Swedish automobiles; he also loves a roadster now and again. The Morgan Plus 4 was a one-of-a-kind roadster built to provide a little more power than was available at the time. The car handles beautifully and has a distinctive design with an extended front and tasteful interior. Despite the fact that so much about the automobile has changed since its inception, Seinfeld has managed to preserve his in mint condition.

Seinfeld’s collection includes not just German automobiles, but also several legendary American automobiles. The Cadillac Seville has always been different from the rest of the Cadillac range; it’s always been something special. The car’s elegant lines and swooping interior were one of the car’s defining features at the time. Cadillac didn’t scrimp on luxury, and there wasn’t a lot of competition at the time.

The 971 Ferrari 365 GTB/4 Daytona is the peak of Seinfeld’s exotic collection. This is a sports vehicle that needs no introduction, and the moment you see it, you know it’s something special. The car’s sleek lines set it apart from the competition, which is a positive thing in a lot of ways. The 365 GTB was created to bring the thrills of the racetrack to the average person.

Both Jay Leno and Jerry Seinfeld have one of these. The 911S was a straightforward sports vehicle with a stunning appearance that has stood the test of time. The Porsche design concept has stayed true to the original form and appearance. Seinfeld enjoys driving these vintage Porsche models and frequently features them on his television show.

This is one of the most valuable automobiles in Seinfeld’s collection, and Jay Leno agrees. Seinfeld’s 1949 Porsche 356 was just the 40th automobile made at the original factory, making it highly rare. The car’s general design will be extremely recognisable, given Porsche has kept the same shape throughout its history. The Porsche 356 is unlike any other car on the road, yet Seinfeld maintained his original model.

The 1966 Porsche 911 is unlike anything else on the market, thanks to its original and attractive form. The 1966 Porsche 911 is unique in that it does not appear to be especially impressive on paper. However, in the long term, the purist design and performance more than makeup for it. You have to take the flaws of any classic sports vehicle with a grain of salt, so the 911 is no exception.

The 1958 Porsche 597 Jagdwagen, which looks like a cross between a Volkswagen Thing and a Hummer H1, was intended expressly for military use. German manufacturers had to establish their viability during this time period, and creating military vehicles was one method to do so. As you’d expect from an early military vehicle, the 1958 Porsche 597 Jagdwagen was neither especially powerful or exciting to drive.

You should expect to pay a lot of money for one of these Porsches, as with other Porsches from this era. When it comes down to it, the pricing isn’t the only thing you’ll notice; the driving experience is just as spectacular. One of the most immaculate automobiles in the Seinfeld collection is the 1963 Porsche 356 B 2000 GS Carrera 2 Coupe. The paint job is original, and the car has minimal mileage, which adds to the price.

This Porsche is one of Seinfeld’s most sought-after and current models, and for good reason. There weren’t many of them made, and the car’s specifications are incredible. The 911’s performance has always been the barometer against which Porsche’s other models are measured. Naturally, with the special-edition turbo and lower weight distribution, the 964 is an extension of that.

The Carrera GT, another exotic sports vehicle shared by Seinfeld and Leno, generally receives a terrible name. The automobile is well-known for its performance, although other aspects of the vehicle might require improvement. The car’s low design drags on almost everything, making it hard to drive unless you’re on the track all day. The Carrera GT’s performance remains unrivaled, and few cars can compete with it today.

Although Seinfeld has a small number of Lamborghini cars, the Miura stands out. The car was built to be a Lambo track car, and it performed well in every way. To this day, the car’s design is incredibly stunning, and its performance is still excellent. There were some flaws with these when they originally came out, but they have now been resolved. The Miura is a fantastic exotic automobile with a high level of craftsmanship.

The Countach, another automobile shared by Seinfeld and Leno, has a distinctive appearance. To the point that the automobile still stands out in a crowd. The Countach is slim and means because of its strong V12 engine, making for a fantastic driving experience.

The 1964 Aston Martin DB5 Coupe may have gotten into the mix because Seinfeld doesn’t drive as much as he collects. The automobile is affectionately referred to as the James Bond mobile, making it a one-of-a-kind product. The 1964 Aston Martin DB5 Coupe is a lot quicker than you’d think, and the external appearance is reminiscent of an early Ford Thunderbird. The DB5 was upgraded and refreshed in many ways.

The 300SL Gullwing is one of the most costly items in the Seinfeld collection. These automobiles are precious, and due to their high cost, just a few collectors in the country own one. The design is typical of Mercedes at the time, and the performance is above average. In one of them, you can expect to drive like you’ve never driven before, as it grabs the road with authority.

These were some top-of-list cars from Jerry Seinfeld’s Car collection as he owns the insane number of cars. His car collection consists of some exclusive Porsches, Mercedes, and many more well-known million-dollar vintage cars.