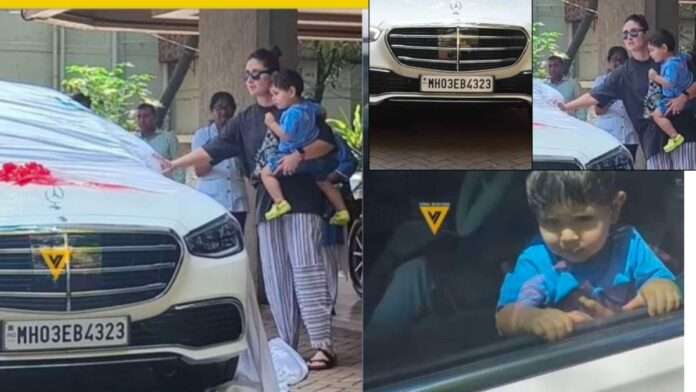 Over the weekend, Kareena Kapoor and Saif Ali Khan took delivery of a new car. Kareena Kapoor’s pictures and videos of her holding her youngest son Jeh and unveiling the car have gone viral on the Internet. The S-Class S350d costs around Rs 1.95 crore on the road in Mumbai.

The latest S-Class S350d is powered by a 3.0-litre inline six-cylinder engine with a maximum power of 282 Bhp and a peak torque of 600 Nm. It is equipped with a 9-speed automatic transmission. Despite the fact that it is a luxury sedan that will be mostly driven by a chauffeur, it is extremely fast. According to official figures, the S-Class S350d can accelerate from 0 to 100 km/h in just 6 seconds.

The S-Class is known for its extensive feature set. It has a front and side-impact avoidance system, a lane-assist system, and other safety features. It also has crosswind assist and a number of advanced features such as a blind-spot monitor, eight airbags, pre-safe seatbelts, and more.

It has an all-LED lighting system on the outside, which includes the headlamps, tail lamps, and all other lightings such as turn indicators. The sedan rides on laser-cut 18-inch alloy wheels and has a lot of chrome on the body to make it look premium and exquisite.

The cabin features soft-touch panels, and the long wheelbase ensures that there is plenty of space inside. It also has rear-seat entertainment screens that can play any video or music while driving, as well as two separate screens for the passengers.

Other Cars In Kareena Kapoor Garage

Kareena Kapoor Khan, like the majority of Bollywood stars, has always had a mysterious car collection. In the past, she has owned Mercedes-Benz S-Class and E-Class sedans from previous generations. She was also recently seen taking a test drive in the latest-generation Mercedes-Benz S-Class with her husband and renowned actor Saif Ali Khan, sparking speculation that she would add the new S-Class to her car collection.