Kevin Hart Gets A 1969 Plymouth Roadrunner Restomod To Die For 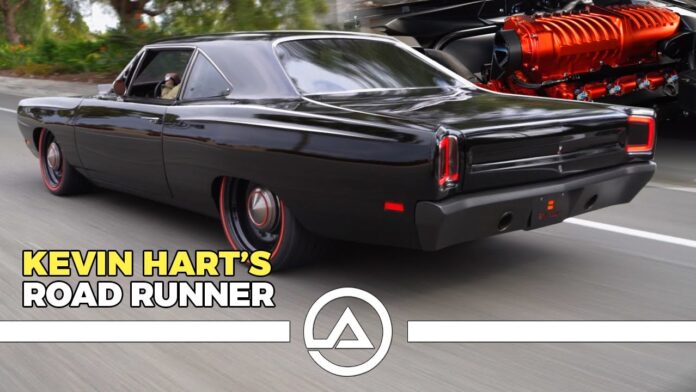 Kevin Hart is a dedicated car fan, but what many people don’t realise is that he has a special fondness for muscle vehicles. And he enjoys combining his passion for horror films. Now he’s teamed up with custom automobile maker Dave Salvaggio to construct Michael Meyers, a one-of-a-kind 1969 Plymouth Roadrunner.

Some may recall that Hart earned another muscle car commission around the same time last year. It was a 1970 Dodge Charger named the Hellraiser, and owing to a Hellephant engine and an all carbon fibre body, it was very much a modern automobile dressed in old-school garb.

The Roadrunner is a little more retro. HRE created a set of one-of-a-kind wheels that seem vintage and fresh at the same time. A 426 HEMI engine with a Whipple blower, Demon heads, and a Demon cam is housed under the hood. Together, these components provide up to 940 horsepower (691 kW).

The vehicle’s Detroit Speed and Engineering chassis makes it seem like a current muscle car. The Roadrunner is slowed by Brembo brakes, which are backed up by a Detroit Speed master cylinder. There’s even a three-pedal manual gearbox on this beast. Carbon fibre is also used in components of the automobile, such as the front and rear bumpers. Furthermore, both the hood and the hood scoop are composed of the lightweight and durable material.

The cogs are swapped using a gear lever that resembles an inverted knife handle, in keeping with the Mike Meyers concept. However, the cinematic impact does not end there. On the headliner, beneath the hood, on the seats, and in many other places around the cabin, little crimson paint splatters to mimic blood. Oh, and there’s a subtle picture of Mike Meyers in the gauge cluster as well. His name is also engraved on the door sills.

When Hart gets a chance to view it and drive it, he is completely taken aback. We can comprehend why. He also received a beautiful little present package, which included personalised Nike shoes, a belt, and a wallet, all with the same Mike Meyers motif.