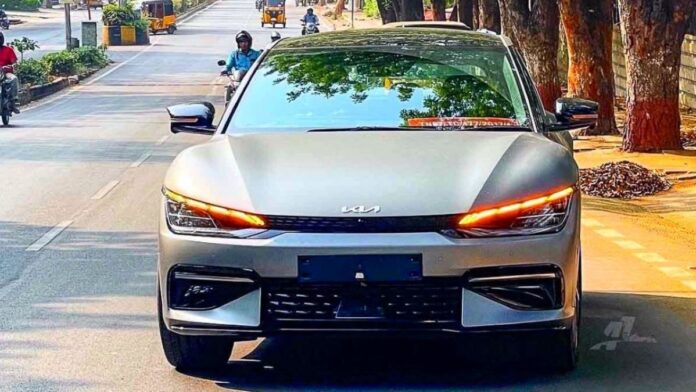 Kia Motors has begun the process of importing the EV6 electric crossover to India. The electric vehicle has been observed for the first time on Indian roads. Only the rear logo was covered with masking tape, as it was not wearing any camouflage. Kia is expected to launch the EV6 in India in June 2022, according to media reports.

Kia’s first electric vehicle for the Indian market will be the EV6. It will be delivered as a CBU (Completely Built Unit), which implies it will be more expensive. It will be equipped with the same level of equipment as the global version. There will be no changes to the design or platform that are specific to India.

It is built on Hyundai’s e-GMP platform, which is also utilized in their Ioniq automobiles. In fact, the Hyundai Ioniq 5 has been sighted in India, where it is slated to debut this year. It will also be delivered via the CBU route.

The e-GMP platform is an electric skateboard platform with all four wheels on the corners and the battery pack in the middle. This allows the cabin’s and occupants’ interior space to be maximized. The EV6 has a 2,900 mm wheelbase.

Because the platform is designed exclusively for electric vehicles, there is no transmission tunnel and the floor is completely level. This translates to plenty of room for the backseat passengers as well. Furthermore, because it is a basic skateboard platform, producers are not obligated to provide a specific body shape. In fact, they can create any body style using the same platform. The battery size can also be modified to meet the needs of the vehicle.

The Kia EV6’s appearance is angular and forceful. There are no other vehicles that look like the EV6, implying that the EV6 has a huge presence on the road. The EV6’s design is based on Kia’s ‘Opposites United’ design concept.

The Kia EV6’s entry-level model comes with a 58-kWh battery pack that provides 170 horsepower and 350 Nm of peak torque. The power is only sent to the rear wheels. It sports a 58 kWh battery pack with a WLTP range of 400 kilometers. A dual-motor system is also available, which boosts the output to 235 hp and provides the all-wheel drive. The acceleration time from 0 to 100 in 8.5 seconds.

If that wasn’t enough, Kia is also working on a GT version with 585 horsepower and a whopping 740 Nm of peak torque. It will compete with the Audi RS e-Tron GT and the Porsche Taycan.

2023 Toyota Innova Likely To Be FWD With Strong Hybrid Engine