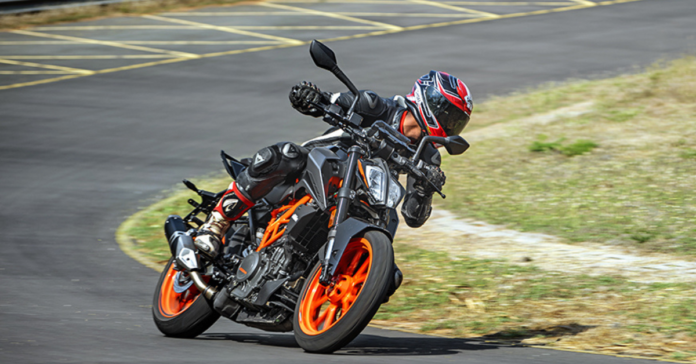 In India, Duke 390 is the most popular, feature-rich, and powerful KTM motorbike. The current-generation version of the bike is currently available in Indian markets for INR 2.88 lakhs ex-showroom. When it comes to the next-generation KTM Duke 390, it’s expected to debut in India this year, and it’s already been spotted testing on European roads.

The naked streetfighter now has a brand-new swingarm with a side-mounted monoshock, which is one of the significant changes presented to the next-gen model of Duke 390. New side panels, rear-view mirrors, an exhaust system, new 5-spoke alloy wheels, and a modern version of the brand’s trellis frame and composite subframe are all included in the 2022 model. Overall, the next-generation Duke 390’s design is more influenced by the monstrous 1290 Super Duke R.

The 2022 KTM Duke 390 is predicted to produce somewhat greater power and torque mechanically. For your information, the current-generation model is powered by a BS6-compliant 373.2cc liquid-cooled DOHC single-cylinder engine that produces 43.5HP and 37Nm of peak torque. The engine is paired with a 6-speed manual transmission with a slipper clutch.

In terms of availability, the new Duke 390 is slated to hit the market in India later this year, with a price increase of roughly INR 10,000 to INR 15,000 most likely.