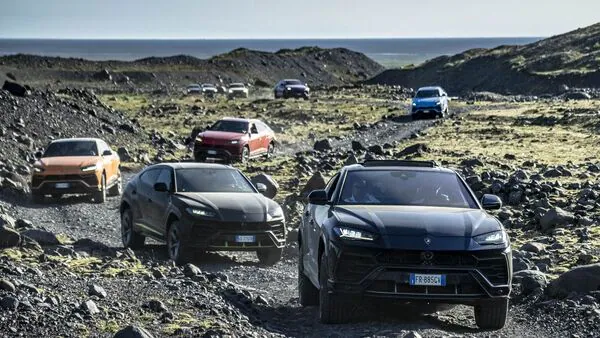 Lamborghini Urus SUV is the bestselling car from the Italian hypercar brand, competes with rivals like BMW X6, Audi Q8, and Bentley Bentayga.

Lamborghini Urus is the bestselling model from the Italian brand.

Lamborghini took the opportunity to showcase the offroading skill of its high-performance SUV and bestselling model Urus through a month-long campaign. To showcase its off-roading capability, Lamborghini Urus SUV took a month-long tour of Iceland with a bunch of customers, who drove 300 km distance each day. The event included 50 Urus owners from Europe and the Middle East.

The Lamborghini Urus SUV hit the terrain that included some tough roads, including a lava flow from a new volcano to a waterfall, claims the automaker. Lamborghini claims that despite being a high-performance suave car, the twin-turbo V8 engine under the hood of the SUV along with the additional ride height makes the car well capable of running on treacherous terrain.

Speaking about the car, Lamborghini’s Chief Sales and Marketing Officer Federico Foschini said that the capability of the car’s adventurous driving along with the Ad Personam customisation program makes this SUV appealing.

Lamborghini Urus came as an interesting product from the Italian supercar marquee that has been known for making luxury high-performance coupes for a long. The Urus came at a time when several other luxury automakers were introducing their respective 4x4s. These included Bentley Bentayga along with other cars. Even now as well, automakers like Ferrari and Rolls Royce are introducing their respective products in the SUV segment aiming for larger profit margins. Since its launch, Urus has proved to be a very successful model from Lamborghini that increased its market share across the world substantially.

You May Like:  Cristiano Ronaldo's $2 Million Supercar Crashes into House in Spain

Ford GT Oil Change Cost: How Much it Cost ?