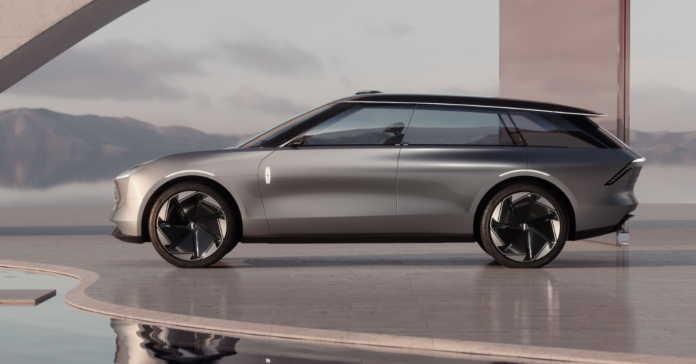 The Star Concept was unveiled by Lincoln, providing us a preview of the brand’s future design philosophy. The Star Concept is a preliminary image of how Ford’s luxury brand would look when three new electric vehicles arrive in 2025.

Lincoln is already a century old, and despite never really being in the spotlight, it has been doing quite well recently. In fact, the company achieved its greatest sales results in 21 years, indicating that it is primed to make a strong start in the electrification era. As the company’s president, Joy Falotico, put it, the Star Concept will “lead the way for our line of entirely electric vehicles.”

Although the company’s ‘Quiet Flight’ design philosophy will evolve in the future, officials remarked that the future also provides them with the opportunity to reinvent what a car could look like. The Lincoln Star concept succeeds in this regard. It doesn’t appear to be very mainstream in this form, but it appears to be something that could be toned down and made available to the market in a production version.

‘Light’ is a big part of the concept, and it shows in a lot of different ways. The A- and D-pillars, for example, are see-through due to the 3D-printed metal latticework. The hood of the trunk is made of electrochromatic glass that is transparent while driving and opaque when the car is parked. The lit first-row floors that flow into the interior to create an airy, open cabin are located beneath the frunk.

Lincoln’s rear- and all-wheel-drive flexible battery-electric architecture is also featured in the idea. With items like lighted crystallines and backlit doors, seats, and exterior features, the lighting component is pushed to the next level. When you approach the automobile, even the Lincoln star that you see up front lights up.

On the inside, you’ll find a floating instrument panel in the style of a wing, which was inspired by aviation. This isn’t the first time Lincoln has done something like this. There’s a display here that runs the length of the building, essentially creating a digital panorama. It combines the centre control screen with the second-row display.

Wraparound chairs, a reclining lounge posture, and individual lounge leg supports are also included in the cabin. A glass beverage cooler is also built in between the back seats. The Lincoln Attaché is an intriguing concept, since it is a digital briefcase with a secret compartment in the rear coach door that enables safe storage for tablets and computers while also serving as a charging pad.

Lincoln has also installed a new Lincoln Intelligence System, which is essentially a digital assistant, for added convenience. It facilitates not just the basic functions found in today’s automobiles, but also experiences such as networked vehicle-to-vehicle and infrastructure capabilities. It can even be used for driver assistance functions, such as Help Me See and Park for Me, by issuing orders. A one-touch pedal is included in the Star idea.

“This is a shining example of what happens when we combine Lincoln luxury with flexible electrical architecture to create unimaginable experiences for customers,” said Jim Farley, president and CEO, Ford Motor Company. “We can truly revolutionize how people engage with the brand and scale it across an exciting lineup of products that catapult Lincoln into the digital, connected age.”