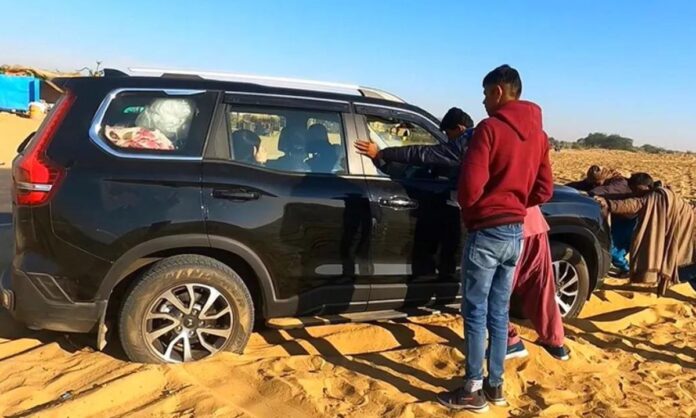 We have all seen the surge in the popularity of SUVs in India in recent years, and with increased interest in SUVs among customers, there has also been an increase in the number of off-road aficionados. There are a good number of 4X4 off-roader SUV alternatives on the market right now, and some of them are selling like hotcakes. Mahindra’s new Scorpio-N is one such new SUV that receives the 4×4 option. Although rear-wheel drive variants account for the majority of sales of this SUV. Despite this, some people feel they can go off-roading without the requisite 4×4 technology and characteristics, and what happens when they do so is depicted in this video.

A video was just published on YouTube by the channel KAUSHIK VLOGS. In this video, an all-new Black Scorpio-N is seen alongside a road, getting ready to drive on sand. The Scorpio-N driver then begins driving towards the beach, and the vehicle becomes trapped in the sand after only 150 metres.

The amusing aspect of this whole affair is that the car became stuck in the sand although the typical asphalt was only 10 metres to the left. Following this, the individual filming the video approaches the car and demonstrates that the SUV’s back wheels had been stuck in the fine sand of what seems to be Rajasthan’s deserts.

The guy behind the camera then says that this RWD car is not designed for driving on sand and that they will now attempt to get this vehicle out of the sand. Moving ahead in the film, we can see that the family then seeks assistance from the locals, who then begin the recovery process.

The folks assisting this family then attempt to clear some of the sand from beneath the tyres before pushing the car forward with the person behind the wheel providing little acceleration. And, after a few minutes of battling back and forth and clearing sand, the vehicle is eventually retrieved. After all of this, the family drives away. The Scorpio-driver N’s then advises others not to do what they have just done.

We can learn from the video why people should not do something like this. First and foremost, everyone should be aware of the purpose of their vehicle. For example, if the driver is aware that his vehicle lacks the 4 system, he should avoid driving on different terrain. Second, even if the vehicle is capable of travelling off-road, it should avoid trailing in such terrains if it is not equipped with adequate and specific off-road tyres.

Finally, everyone should be aware that even if they do everything correctly, they may become trapped and should have a backup to bring them out. Fortunately, this family did not travel too far into the desert and was located on a road where locals could assist them. If they had been in the desert’s interior, the car would not have pulled out so easy.