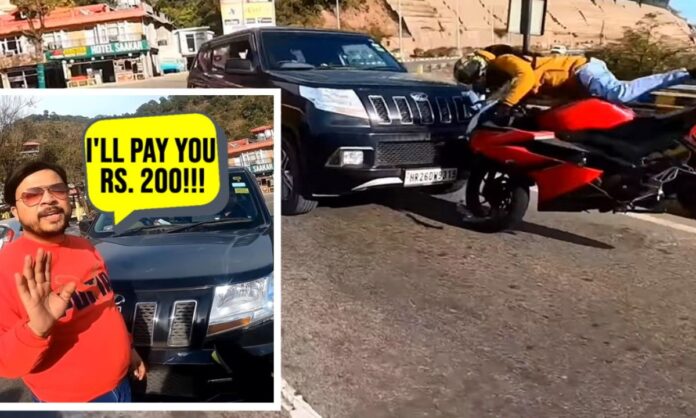 Driving in the wrong lane on Indian roadways is an annoyance that has only grown more difficult than before. What’s even more alarming is that some people try to explain their crime by blaming motorists who are driving or riding properly if they get in their way. While many individuals do not recognise their faults, here is a ‘rare’ instance of a person admitting responsibility after his automobile crashed with a motorcycle head-on.

A YouTube video from the Moto Mutants channel shows a Yamaha R15 rider who was travelling in his lane colliding with a Mahindra TUV300 that was approaching him while driving on the wrong side of the road. Another Yamaha R15 rider, who was riding with the individual who was hit by the TUV300, rushes to his aid and confronts the driver of the Mahindra TUV300.

At first, the Mahindra TUV300 driver refused to accept responsibility, instead telling the bikers that he was driving on the wrong side of the lane because he was following another vehicle that was doing the same thing. However, after various counterclaims from the R15 riders, one of whom claimed that the entire crash was filmed on his action camera installed on his helmet, the TUV300 driver admitted his error.

As compensation, the driver was paid Rs 200.

The second Yamaha R15 rider, who was riding beside the rider involved in the crash, got into a dispute and promised the afflicted rider that he would recover the costs of repairing his motorbike as a result of the TUV300 driver’s error. While confessing his error, the TUV300 driver gave him a meagre Rs 200 compensation, to which both R15 riders immediately objected.

Following the crash, the R15’s front windscreen and front brake lever were destroyed, and its owner immediately said that the Rs 200 compensation was insufficient to meet the necessary expenditures. However, after considerable persuasion and discussion between the TUV300 owner and the R15 rider, the former agreed to a Rs 2,000 compensation. The TUV300 stayed cool and controlled throughout the talk, but in the midst, he continued attempting to leave by making ridiculous reasons.

Driving in the incorrect lane of the road is harmful for both the car and other vehicles approaching from the opposite direction. Such occurrences may only result in accidents, which can be lethal if the vehicles involved are driven or ridden at high speeds.