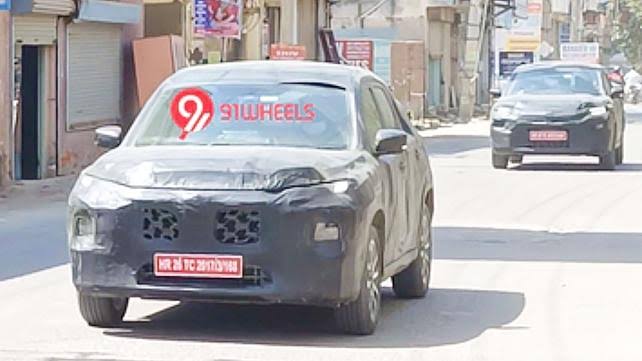 Maruti Suzuki and Toyota have been working on a tiny SUV together, and the next model’s test mules were spotted for the first time in India. Despite the fact that the prototype units are extensively camouflaged, it appears like the SUVs from both brands are being tested together based on the exposed areas. The Suzuki emblem is evident through the camouflage on one of them. The collaboratively developed compact SUVs will compete in the crowded compact SUV category against the Hyundai Creta, Kia Seltos, Skoda Kushaq, and Volkswagen Taigun when they launch. The new SUV is likely to come with a slew of technological and safety features.

Hyundai-Creta Rival In The Making

The SUV has several codenames from Maruti Suzuki and Toyota. While the former refers to it as the YFG, Toyota internally refers to it as the D22. The test mules for the two SUVs have very different front ends. Split headlamp units will be standard on both SUVs, with the main headlamps mounted in the bumper and LED daytime running lights replacing traditional headlights. The DRLs on the car, however, are distinct in appearance, with one boasting twin striped LED daytime running lamps and the other looking identical to the ones found on the Toyota RAV4-based A-cross SUV offered in international markets.

The SUVs have a similar look to Toyota’s RAV4 crossover SUV, with squared-off wheel arches, thick tyres, and high ground clearance, possibly exceeding 200 mm. One of them appeared to be the standard model of the SUV, with steel rims, while the other appeared to be a higher-spec vehicle, with alloy wheels and a rear windscreen wiper. The two SUVs are slated to be released in short succession later this year, most likely before the festive season of Diwali.

Both SUVs will be built at Toyota’s plant in Karnataka, and diesel powertrains are expected to be unavailable at launch. However, the automobiles are expected to come with an optional full-fledged hybrid powertrain, similar to the one found on the Toyota Camry, which will significantly improve the SUV’s fuel economy. The hybrid technology will also allow the SUV to be driven solely on electricity for short distances at lower speeds, which will be useful in city stop-start traffic, and the electrical aid will boost the engine’s power output.