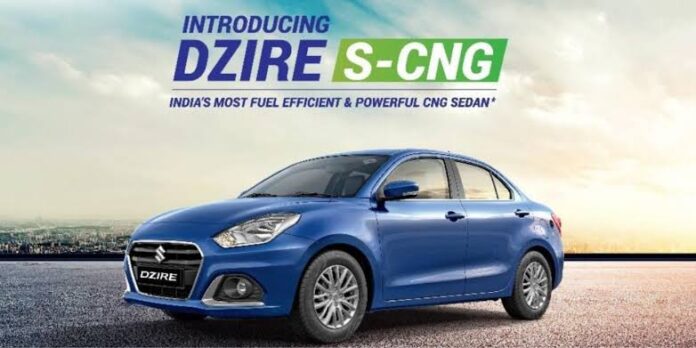 Maruti Suzuki India is putting a lot of emphasis on automobiles that run on compressed natural gas (CNG). It now has the largest fleet of factory-fitted CNG cars in India, all of which are equipped with the company’s S-CNG technology. The Indo-Japanese automaker has now introduced an S-CNG variant of the Maruti Suzuki Dzire, its best-selling subcompact sedan. Unlike its other CNG models, the Dzire will be available in two trim levels: VXI and ZXI, with prices starting at Rs. 8.14 lakh and Rs. 8.82 lakh (ex-showroom, Delhi). For the fleet category, this is the first time the firm is supplying the Dzire with a factory-fitted CNG kit, which was previously confined to the Tour S.

Shashank Srivastava, Senior Executive Director, Marketing & Sales, Maruti Suzuki India, remarked at the launch of the Dzire S-CNG, “With transformative technology like the S-CNG, more and more customers are actively looking to switch to S-CNG vehicles to fulfil their mobility requirements. Today, we have the largest portfolio of 9 green S-CNG vehicles. With low running costs and high fuel efficiency of S-CNG vehicles, their demand has tremendously gone up as we have witnessed a 19 per cent CAGR increase in our S-CNG sales in the past five years. This is a testimony that customers are increasingly embracing technologically advanced, eco-friendly, factory-fitted and safe Maruti Suzuki S-CNG vehicles.”

The powertrain and suspension of the S-CNG vehicle have been particularly modified, according to Maruti Suzuki India, to provide improved engine durability, more mileage, and superior safety. The Dzire S-CNG will use dual interdependent Electronic Control Units (ECUs) and an injection system to give an air-fuel ratio, just like the previous S-CNG variants. In terms of amenities, the car will be equivalent to the normal Dzire’s VXI and ZXI trims. Maruti Suzuki Subscribe will also offer the new Dzire S-CNG for an all-inclusive monthly subscription cost starting at Rs. 16,999.