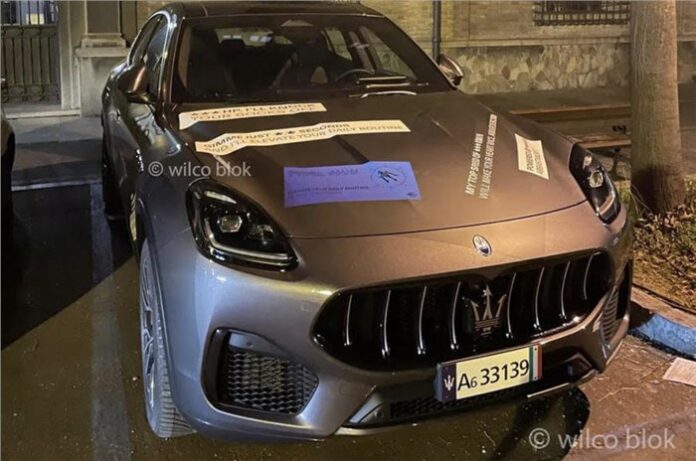 The Maserati Grecale has been photographed for the first time without its camouflage, ahead of its public appearance on March 22. Wilco Blok shared new photographs of the Porsche Macan rival with complete production-spec bodywork on Instagram. It’s sporting some of the promotional stickers seen in recent teaser shots, but it looks substantially the same as it will when it’s officially shown in less than two weeks. The Grecale was supposed to be unveiled last year, but it was postponed owing to a scarcity of semiconductors, which prevented Maserati from starting series manufacturing.

The decision was made “in light of background challenges that have created pauses in supply chains for essential components necessary to finish the car’s production process,” according to the business. Due to the crisis’s production constraints, it would not have been able to meet the expected global demand for the car. The Grecale is roughly the same size as the Alfa Romeo Stelvio, with which it will share the majority of its underpinnings, and now that we’ve seen the Grecale’s final design, the larger Levante’s influence is clear.

Former FCA CEO Sergio Marchionne first confirmed the new SUV in 2018, as part of a complete makeover of the company’s product line-up. The MC20 will be available in three versions: coupé, Spider convertible, and fully electric, as well as a new Granturismo and Grancabrio, which will be available in both combustion and electric versions.

Grecale is named after the Mediterranean Sea’s ferocious north-east wind. The car is an important aspect of Maserati’s aggressive revival plan, which began in 2020 with the unveiling of the MC20 supercar. The SUV will be constructed on the same production line as the Alfa Romeo Stelvio in FCA’s Cassino facility in Italy, and will play a “vital role in the brand’s future.” Maserati is to invest over €800 million (around Rs 640 crore) on the factory. It will also have a lot of the same underpinnings as the Stelvio, and a completely electric version, the Folgore, is on the way. The combustion-engined versions, on the other hand, will use Maserati engines rather than Alfa-sourced engines, with the mild-hybridized 2.0-litre turbo offered in the Ghibli and Levante, as well as a downtuned version of the MC20’s new Nettuno V6 for the most powerful option.

SUVs are predicted to account for 70% of Maserati sales by 2025, with saloons falling to 15% and sports cars like the MC20 accounting for 5%. By 2024, the brand will also offer a new-generation Levante and Quattroporte, both of which will be powered by an electric motor. This will have an 800V electrical system and three motors in top-spec version.

Trending Now:  The Maserati Grecale SUV Will Debut On March 22