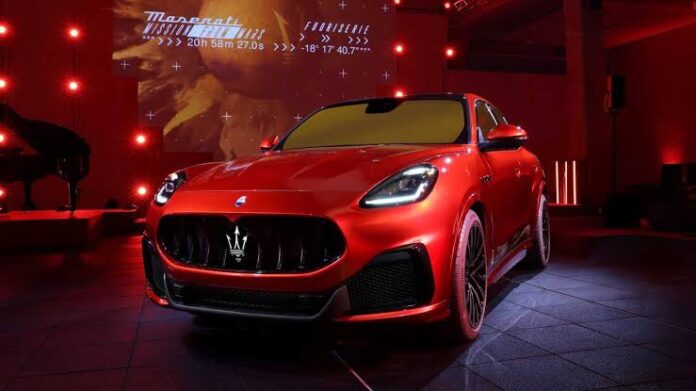 Maserati has presented a personalised Grecale Mission From Mars just days after its global premiere. The one-off SUV has been touted as an order from Mars, with a number of modified cosmetic components inspired by space travel and the planet red planet. It is a creation of Maserati’s Fuoriserie Program – Maserati’s customization initiative. Maserati hasn’t said who ordered this one-of-a-kind bespoke Grecale.

The Grecale Mission From Mars is painted in the colour Galactic Orange. Maserati claims that the paint finish was “inspired by mineral dust and metal corrosion,” and that it resembles the red soil on Mars’ surface. The one-of-a-kind luxury SUV rides on a set of custom Vortex wheels, and the tyres are “crafted from a specific blend dedicated to the planet Mars,” according to Maserati. A triangular logo with the Maserati trident on the front fenders, reminiscent of a space mission patch, and unique door graphics saying “Maserati Mission From Mars” with a timer indicating hours, minutes, and seconds are among the exterior elements. The Maserati symbol on the C-pillar is also distinctive, with its dot-matrix inspired design and glitch effect.

The interior features orange accents on the steering wheel and a Maserati patch sewed into the seat headrests. Maserati claims to have employed “transverse lasering with a contrasting multi-colored welded backing, tape, silicone coatings, embossing and debossing on leather,” among other techniques. The panoramic sunroof, which is embossed with a start chart to contribute to the outer space vibe, is a highlight of the cabin.

While Maserati hasn’t revealed the details of its customised Grecale, the Italian brand’s new SUV is available with four- and six-cylinder petrol engines. Grecale Folgore, an all-electric vehicle, will be released in 2023.